Georgia in a Campervan - Svaneti, The Black Sea and crossing back to Turkey

Posted by Unknown on November 18, 2018
So, it was with a heavy heart that we left Armenia, and headed back to Georgia (for the second time). The border crossing was pretty painless, but again we had to buy third party insurance cover as our home policy did not cover us. We were through, and legal, all within about an hour. Unfortunately the road away from the border was being completely reconstructed, and was in a state of chaos. It kind of reminded us of Kyrgyzstan… Not in a fond way.

Just a few km from the border we made a quick stop at Vardzia. A set of cave monasteries dug into vertical cliffs during the 11th Century. It was built to provide refuge from the onslaught of the Mongol hordes, at the time, the most devastating force Europe had ever seen. It is quite a feat of medieval engineering, spread over 13 levels, with over 6000 dwellings, churches, a cathedral and all linked by tunnels and fed by an underground spring. It is well worth a visit.

Our main destination was the region of Svaneti, a mountainous region in the north, made famous due to its more than 200 UNESCO World Heritage stone towers. The latter were built as defensive structures during the 9th Century to keep out the endless stream of invading armies. Now though, they just give the whole valley a wonderful fairytale medieval feeling.


We needed to find a base for a few days, firstly as our laundry bag was taking up the whole bathroom and, secondly, we had noticed a rather worrying problem with the van... Every time it rained, the seal between the windscreen and the bonnet would allow water to literally gush onto the top of the engine and pool around the diesel injectors. Not ideal. Using our trusty Park4Night app, we found Camping Sopio. A pretty rundown campsite (the front garden of a local family) with a dog the size of a horse guarding it. We negotiated the price down and settled in, getting the washing machine fired up and a washing line hung between our van and the apple tree beside us.

Apparently the leak is a common problem on this generation of Ducatos, bad design by the Italian company, and something that can cause catastrophic engine failure. This very thing happened to someone on the ever helpful Globecar owners’ Facebook group resulting in a mechanics bill of almost £5,000. After a bit of research we decided that the best course of action was to remove the ‘Scuttle’ (new word to me) clean and seal with special vehicle windscreen sealant. After a days work and fingers black with sealant, we finished the job and reassembled all the different bonnet sections. And we held our breath whilst we tested it with a hose. I think we did it, no water in the engine, all running off into the drainage hole. We both breathed a sigh of relief, we both just hope that it stays sealed. We’ll keep an eye on it. 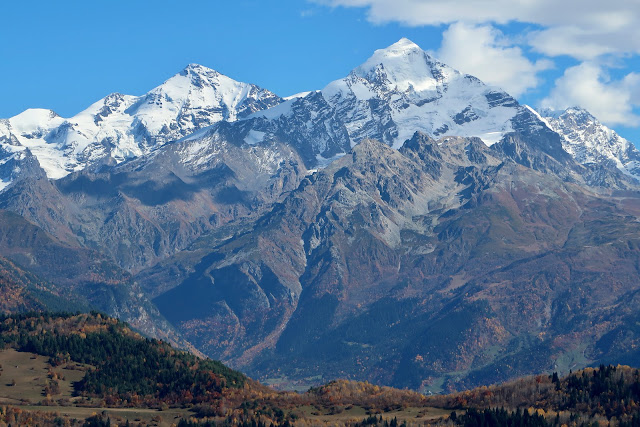 If you ever happen to find yourself in Mestia, check out Cafe Lanchvali. They serve the most amazing food ever, and at such a great price. After doing a 16km-hike up into the mountains, we stopped off here and filled our empty stomachs. It was most welcome! Especially their khachapuri; a sort of gondola-shaped bread filled with buttery gooey cheese topped with an egg. Simply delicious.

Our penultimate night in Georgia, wild camping on the side of a very quiet road. At about 11.15pm, we heard the ominous sound of a car pulling up next to us and, through the gaps in the blinds, we could see blue flashing lights. We opened the door and were faced with three machine gun-wielding-policemen. They told us that this was an area known to have ‘dangerous wild animals’ and that we must, at once follow them to the police station where they assured us we could camp safely for the night, and use their toilet. We were half way through an episode of Better Call Saul and Sylvie protested a bit but, in the end, we packed up and had our first ever night camping at a police station.

Our Georgian journey was quite brief in the end as the weather was against us, and we were yearning for Turkey.

We had sampled some very wonderful food and seen some stunning scenery. We are also very happy to have survived the crazy, crazy driving habits. Some of the craziest we had seen on our whole trip.


What we’re watching at the moment - A Dangerous Dynasty: House of Assad, Better Call Saul Season 3, The Apprentice (UK), Last Week Tonight with John Oliver and Have I Got News For You


Favorite podcast - Pod Save America & Today in Focus (The Guardian)