Posted by wakeyjamie on October 05, 2018
So after blowing the remainder of our rubbles on our favourite Russian choccy biscuits and filling up with Russia’s finest premium diesel, we left the Russian Federation and said hello to Georgia. A country that many people over the years had told us was an interesting and beautiful country.

We entered on the famous Georgian Military Road built by Russian soldiers in 1783 but has existed as a route for trade and invasions since many years BC.

We had planned to head straight to a campsite in the first town you come to in Georgia. In our minds I had imagined a tiny little village with sheeps and cows wandering the cobbled streets. Well, it was a bit different than that. The town is a bit of a tourist trap it turns out, as it has one of the country’s most famous churches, perched high above the village. The main car park was full of coaches with thousands of tourists rushing around, drinking lattes and taking selfies.
We decided to carry on a bit and find somewhere away from the beaten track. This led us to the little sleepy town of Sno. Where, in the main square, sits a ruined castle perched on a rocky outcrop. Some local children taught us a few words of Georgian and we found an amazing gushing fresh water spring to fill up our depleted water tank. This was a really lovely introduction to Georgia.


Our first attempt to park by the river at the end of the village turned out to be a no go - part of the track had collapsed. Hiking into the Juta valley from here was unfortunately not for us.
Luckily we didn’t have to go much further, only a few kilometres down. We took a turn through the hamlet of Kobi and parked the van at the beginning of the Truso valley. After the intense heat transiting through Kazakhstan and Russia, it was lovely to cool down at 1,450m, we even had to get the blankets out of the back of the van to put over the duvet. It was very snuggly.
The next day we set out to hike to a ‘fizzy lake’ which we had seen on various maps. It was an ace hike although we took a wrong turn and ended up on the wrong side of the valley and could only see the lakes from a distance of about 300m. They looked pretty good from there. We were a bit knackered when we got back, a total of 18km but we decided to move on and camp somewhere else.
A quick stop at the Russian-Georgian Friendship Monument, and onto the Tbilisi National Park where we found a nice forest clearing to make our home for the next 18 hours. After another quiet but cold night we headed onto the capital, Tbilisi, and to a hostel we had found on iOverlander which has a private car park you can ‘camp’ in.

We spent four nights there, exploring the city and chatting with other overlanders. Rob who had driven in his 1960’s Landrover from Perth, Australia through Pakistan and India back to his hometown of Bath. A lovely German couple, Bjorn and Marieka who had driven a similar route to us in their much newer Landrover. And Carlos, a Portuguese motorbiker living in Sydney on his way to Iran and onto South America after that. 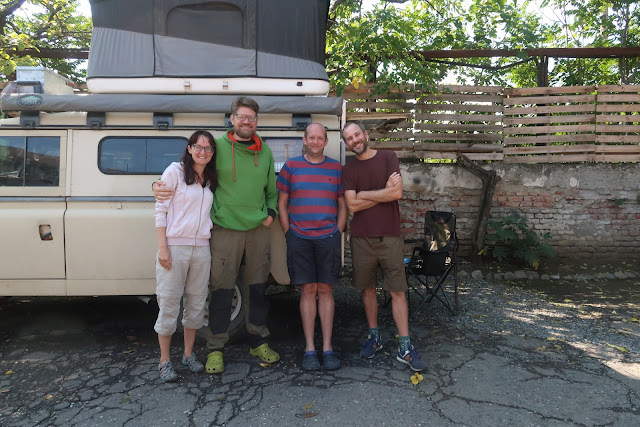 Tbilisi is a crazy city. It’s a bit like a European city, evolved over many centuries and from a different universe. It feels European, medieval and completely foreign all at the same time. Around every corner there is another little dilapidated quarter oozing charm and character. It’s a city that has been sacked and burned to the ground so many times, people have stopped counting. But yet, they have maintained their own language and their own very unique alphabet.

We had a lot of fun exploring the tiny streets, and we even managed to test Georgia’s number one Khachapuri restaurant. This is their national dish, a “boat of bread” with cheese, egg and butter all mixed together. We have a feeling it's very bad for you, but crikey is it exquisite! We hope to fit in a few more before we leave.

After our little city break in Tbilisi, we headed for Armenia, we had only spent seven days in Georgia, but we knew we would be back to get to Turkey. There are many regional disputes in this region, so few borders are open. There is no crossing available between Turkey and Armenia, and Armenia and Azerbaijan, so Georgia becomes a regional crossroads. 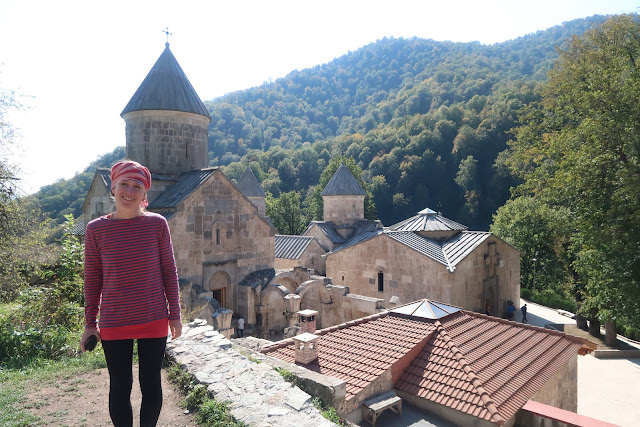 Sylvie had picked up some kind of mega bug and, by the time we came to cross the border, which we had heard was at least a three-hour affair, looked pretty green. And what made it worse was that she had to leave the van for both parts and go through the pedestrian section leaving me on my own to drive the van through. Getting into Armenia was pretty complicated, we had to pay a customs fee on the van and buy insurance, plus the atm was in no man’s land. But it was all above board and no bribery or extortion attempts. 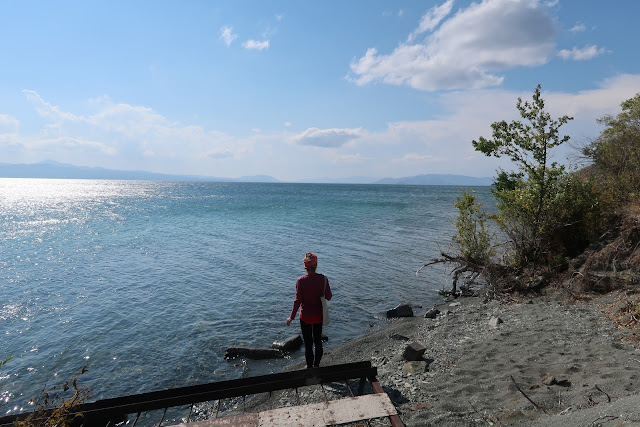 We got a local sim card and Sylvie went to bed whilst I drove through The Debed Gorge, a beautiful but very busy road littered with abandoned Soviet factories and ancient medieval monasteries. We found a place to park on our trusty Park4Night app, the car park of The Haghartsin Monastery high up in the mountains. I force-fed Sylvie some magic hydration pills, forced her to have a shower and some food and the colour gradually returned to her face. In the absolute stillness and darkness of being at 1700m we started watching Ozark. An interesting Netflix series about a financial expert turned money launderer for a Mexican drug cartel.

The next day, Sylvie looking much more alive than the previous day, we explored the monastery and then set of to lake Sevan. A lake 1/6 the land area of Armenia which sits at an altitude of 2,000m. On the deserted western side we found a little secluded beach and swam and had a little slice of the Caribbean all to ourselves, right there in the caucuses.
After a few days of wild camping and exploring more medieval monasteries (Armenia has many), we drove through Yerevan and up into the Yerevan highlands to one of only two campsites in the country. I had read a review that said it was a little slice of paradise, and we couldn’t agree more!

The campsite sits in a gorge just down from Armenia’s most sacred site, The Geghard Monastery. Of all the holy sites we have visited in Armenia, this is the most special, stepping inside is a bit like being on the set of an Indiana Jones film. Large cavernous chambers carved out of the cliff face. Inside one of the rooms is a large spring gushing out of the rocks that people come to drink and wash in.
We’ve been here for a few days now. Sandra & Marty, the Dutch owners are the most friendly and welcoming hosts, always ready to give any advice or just have a chat. We did a good long hike down into the valley. So far we have been here for six nights, and we can't seem to leave.

If you fancy a camping holiday somewhere a bit different, then this is the place. It’s a little patch of paradise. We need to be out of Armenia pretty soon as our insurance we bought at the border runs out in six days. So after that we’ll head into Northern Georgia, and then Turkey. We explored Turkey quite a bit on a previous trip but we hope to revisit some of our favorite spots.

Kazakhstan and Central Asia feel like a distant dream now. Did we really go there?