Uzbekistan in a motorhome - from Fergana to Samarkand

Posted by Unknown on September 12, 2018
Just as we were leaving Kyrgyzstan we witness something a bit disturbing. Driving back towards Osh, we saw the aftermath of a crash involving a cattle truck. As far as we know there were no people hurt but there were many, many cows either dead or in an incredible pain. We saw about six completely dismembered cows with their inners spilt all over the road, and then about three who were breathing heavily with broken legs and a lot of blood. It may sounds a bit harsh, but from the crazy driving and severely wreckless blind corner overtaking, it was maybe to be expected. We had on many occasion, had to take evasive action to avoid a collision. We both felt like we had witnessed it first hand, and felt for the rest of the day a bit shell shocked. 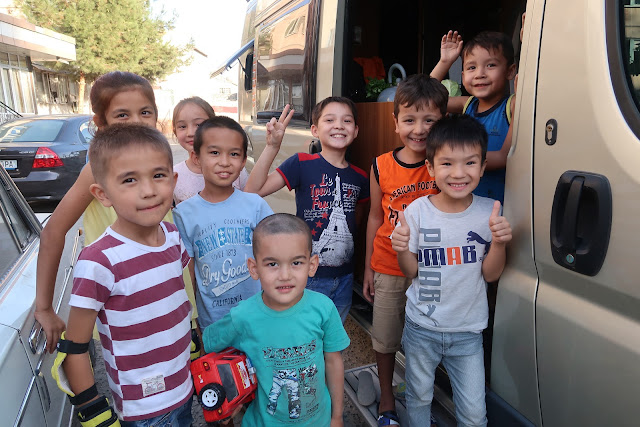 The border to Uzbekistan was very crowded. Less than 10km from Osh, it was dusty, hot, enveloped with fumes of vehicles and chaotic with queues of pedestrians on both sides desperately pushing each other to make it to the front, family members passing each other bundles full of presents and the latest items they’ve acquired at a fraction of the price in Kyrgyzstan. 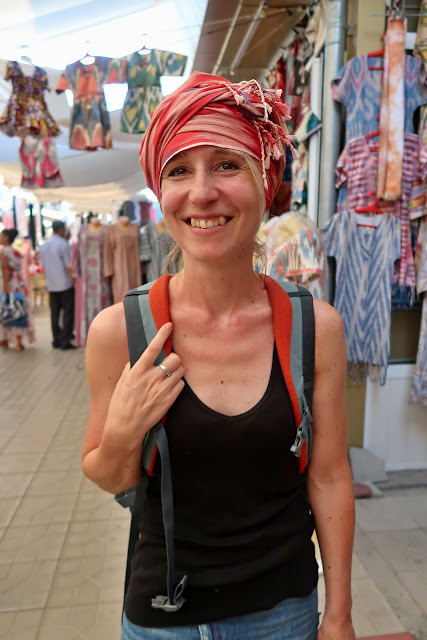 We felt a little removed from it all as we were told to go into the vehicle queue, which was predominantly made up of big dirty old soviet era trucks, who belched out great plumes of thick acrid black smoke every time they inched forward. We patiently waited in the van and watched the slight chaos mounting around us. But we made it to the front. For the next hour or so, we were told to go from one window to the next in what seemed like a game of table tennis. We showed our passports and “passport machina” (V5) countless times to many officers, some friendlier than others. 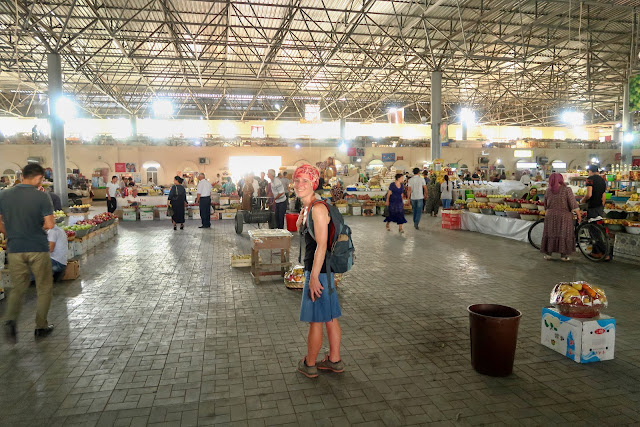 Three hours later, we were driving on Uzbekistan’s soil. It was smooth asphalt! The landscape had changed again as we drove through the heart of the Fergana valley - endless cotton fields and the canals to irrigate them with a few hills in the background. The city of Fergana was our next stop, but we decided to stop off enroute as we found a nice spot by the water. A few kilometres from the main road, it was quiet, our peace only disturbed by a couple of fishermen on the other side of the bank and a young shepherd. 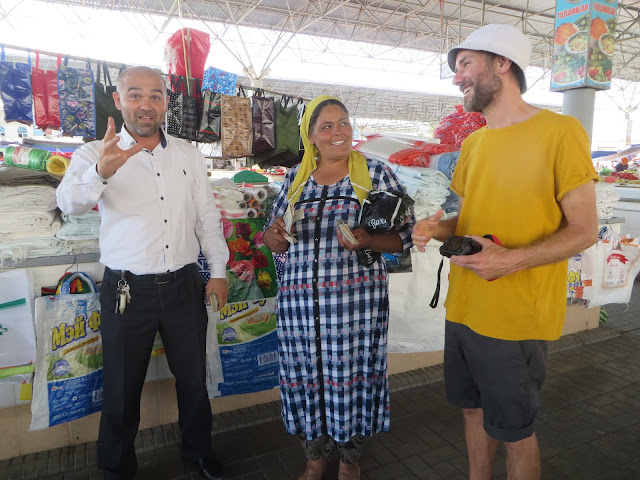 It is there that we experienced the two sides of Uzbek psyche, amazingly beautiful hospitality, and post soviet paranoia. That night, at about 11.30pm about half an hour into an episode of The Deuce (brilliant HBO series about sex workers in 1970s New York), we had a knock on the window, we opened the sliding door to be confronted with a small van with some policemen looking in inquisitively. They were obviously slightly confused as to why a British campervan with a French / English couple were camping next to an irrigation canal in the middle of nowhere. Uzbekistan has a strict tourist registration process, which requires tourists to register at a government-approved hotel every night. This is a bit difficult when you are travelling in a camper. They said that we needed to move immediately and come to the local town square, they even told us that it wouldn’t be safe if we stayed. Their mood quickly changed when we explained that it would only be one night, and we promised to be gone by 9.00am the following morning.

The next morning, we experienced the other extreme, a local farmer and his five sons brought us fresh grapes and ‘homegrown’ honey. They had invited us for tea that morning, but sadly had to turn it down as we were conscious the police could come back at any moment to check on us. This overt generosity followed us all over the country. 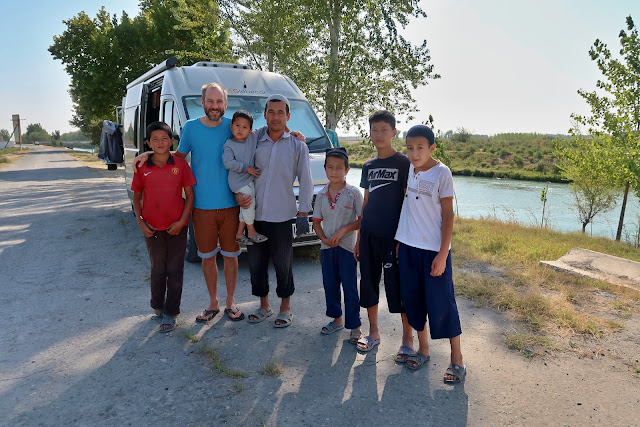 Next we continued onto a city that Lonely Planet had described as ‘Nothing Special’ but we found exactly the opposite. We needed some home comforts, namely a washing machine as we had no clean clothes left and Jamie had been wearing the same socks for about 2 weeks. Once again the iOverlander app came to the rescue and recommended a hostel that had a safe, quiet courtyard to ‘camp’ at the back. El, the hostel owner was such a lovely man, and gave us the use of a room with shower, toilet and washing machine. We camped for two nights in the communal garden at the back, and made friends with a lot of the locals, the kids really loved our van. We gave them a guided tour.
Lonely Planet are wrong about Fergana, it’s a lovely little city with great people.

We are starting to find the driving in Uzbekistan increasingly difficult. The drivers are aggressive, verging on suicidal, which is the polar opposite to how the people are. But anyway, onto Samarkand, known for its mosques and mausoleums sitting on the Silk Road, the ancient trade route linking China to the Mediterranean, and claiming to be the oldest continuously inhabited city in Asia. It really wasd beautiful, especially the Registan, which looked really beautiful after sunset. 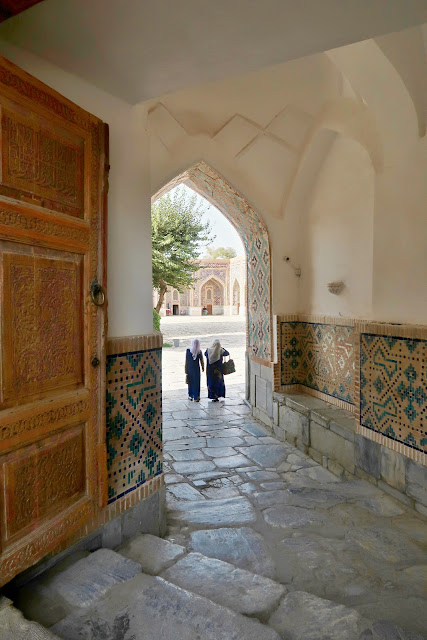 We think this might be our last stop in Uzbekistan. We are struggling a bit with the distances, the lack of diesel and its bad quality when we do find it, the dangerous driving and the bad roads (yes, the asphalt wasn’t actually good in the end).

We think it might be time to start heading back to Kazakhstan, past what’s left of the Aral Sea and onto Uralsk. Where, fingers crossed, we can get our Russian transit visas so we can cross Russia and head to Georgia and Armenia. 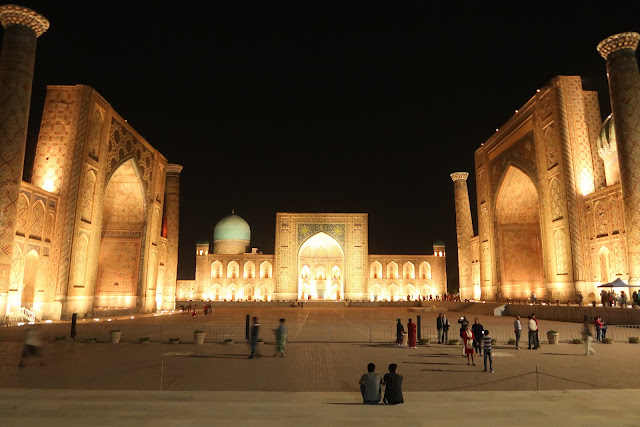