The beautiful mountains and plateaus of the Altai Republic

Posted by Unknown on July 15, 2018
After mosquitoes galore, heat (Siberia is experiencing a heat wave right now, which seems to be pretty much the same as, not only, the UK, but most of the world too) and the latest van hiccup, we had been yearning for some mountains. Siberia was lovely but it’s pretty flat and forested.

We were rewarded by fast flowing rivers, green hills and mountains, and more arid, but beautiful landscapes the further we drove on the famous gateway to Mongolia – the “Chuyskiy Trakt”.

Yes, it is not the most direct route to Kazakhstan, but we had gained a lot of time and mileage not heading to Lake Baikal – the call of the mountains and driving on one of the most spectacular roads in the world was too tempting, and the lack of mossies and cold nights was just wonderful.


The Chuyskiy Trakt often crops up in lists of most beautiful roads on the planet. It really didn’t disappoint. After the town of Gorno-Altaysk the road climbs and the peaks rise and we were presented with some of the best scenery that Russia has to offer. The opportunities for wild camping along the road were vast and for our first night we took a turn down a road that seemingly didn’t lead anywhere.

We drove and drove and eventually came to a rather scary looking military checkpoint, but weirdly, just beyond we could see a really amazing, modern-looking house, looking a bit like a modern art gallery. We turned around and went back to camp in a deserted car park. The next day some locals stopped for a picnic and got talking with us. They explained to our surprise and astonishment that the house we saw was actually President Putin’s Summer Dacha or Summer house. Unfortunately we don't have a photo of it, I think we might have been arrested if we had tried.

We nicknamed this road ‘The Road to Nowhere’ and it became our home for the next three days. It was almost deserted and we were able to safely leave the van and hike down to a little beach next to a confluence of three rivers. I had a little swim whilst Jamie sat and took photos of some pretty fierce looking birds of prey to send to his dad and Colin for identification.

Continuing down the Chuyskiy Trakt we needed a village with decent enough 3g signal for Jamie to be able to stream the England game that was coming up. It was England against Sweden and at stake was a place in the semi finals of The World Cup 2018!
We ended up on a popular little campsite that for Russia was pretty well developed, hot showers squatty toilets and wifi, that didn’t work. But we were right next to a phone mast, so we fired up the England game and settled in to watch. Well it was a great result in the end, but unfortunately for the Russians, their world cup party ended that night with defeat to Croatia. We were really sad about this as we had been swept up in the football joy of the country.

We ventured up ever further towards the border with Mongolia. It seems so strange to have travelled overland from Wakefield in the north of England and to be less than a stones throw from Mongolia, a country one always considers as being a remote far away place. The landscape here is so different again. It’s incredibly arid, apparently the driest place in Russia, and a landscape that resembles Mars. 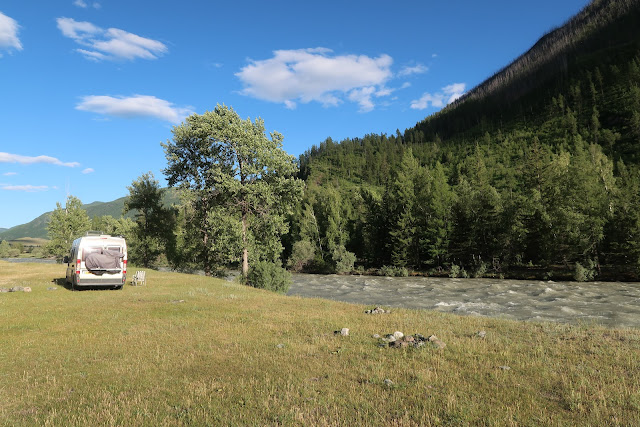 We camped for a night on a high desert plain. Probably one of the most amazing wildcamping sites we have ever stayed in. We were at 1900m and the night time temperature dropped to a low of 3 degrees, which meant we slept like babies. The next day we also discovered that we had inadvertently camped next to some sort of sacred site. 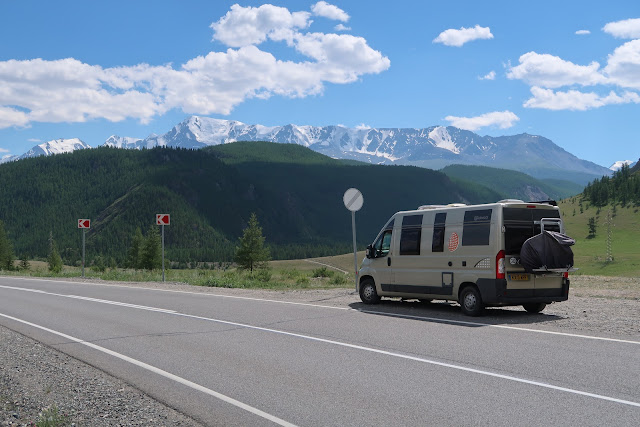 The Altai republic really was a wonderful way to close our time in Russia. We were blown away with this place. The only downside, when we turned the ignition on to leave we were greeted with the ‘Orange check engine light of death’ More van problems.