Posted by wakeyjamie on June 21, 2018
When one is travelling in a strange country it always feels hard making decisions about which cities to explore and which to just drive on through. And with a Country the size of Russia, this is amplified ten-fold. 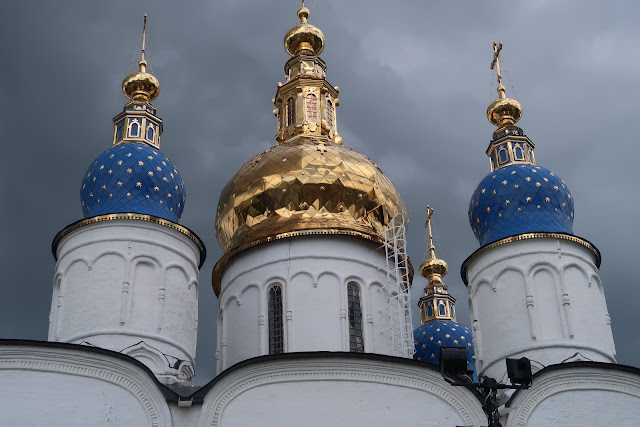 We had this problem in Yekaterinburg. We had heard from a friend back home who knew Russia well that it was lovely, but as it's a world cup city, staying within it for more than 24 hours would have required registration with the local police. A task that can take around 5 hours, a lot of bureaucracy and a fair bit of cash. 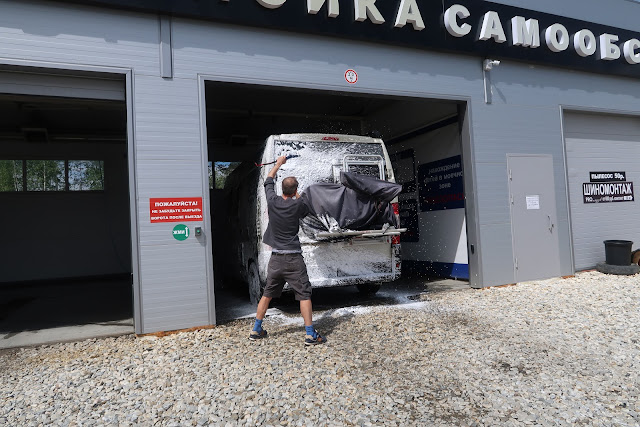 So we decided that the only thing we would stop for was a trip to the car wash. After some googling we found a self service and headed there. A quick bit of google translate, some cash imputted and we were squirting the van with lovely hot white foam. It was actually quite a lot of fun. The van had got increasingly dirty throughout our time in Russia, and that was evidenced by the massive pile of mud that was left in the drain when we reversed away. Well the van did look lovely and gleaming, for about ten minutes because, as we set on our way to Tobolsk, we were hit with a crazy thunder storm. So by the time we stopped it pretty much looked just as bad as before. 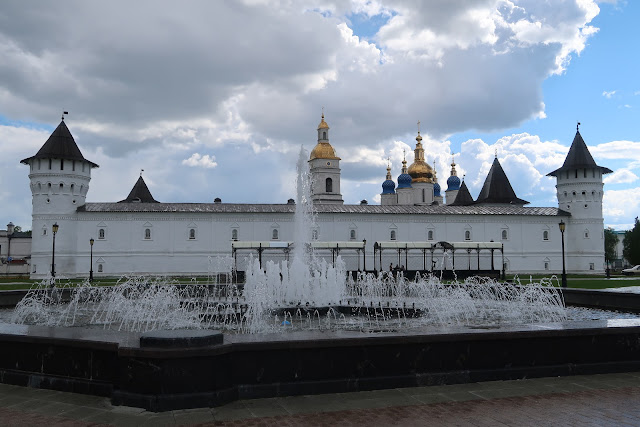 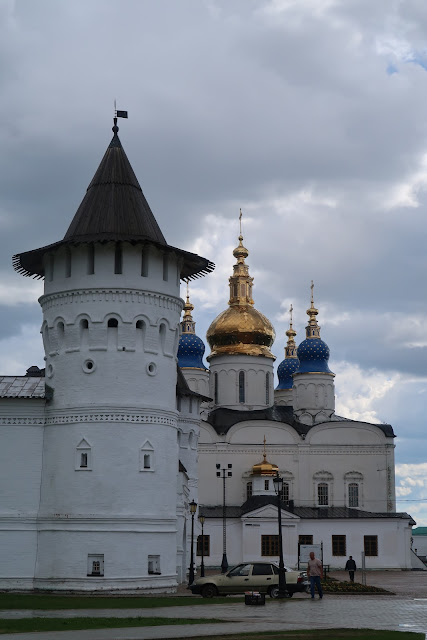 So to Tobolsk, a city founded in 1509 as a Cossak outpost on the strategic confluence of two major rivers. It is one of Siberia's most historic places with a wonderful Kremlin (the only one in Siberia) and a wonderfully decrepit old town.


We were struggling to find somewhere to stay and it was getting late, we had tried various hostels whose car parks we had hoped to be allowed to stay on, but they didn't seem to exist, then we had headed for a 'Kemping' listed on google maps which led us down a muddy track with divets the size of Ladas.

We eventually pulled in at a roadside motel called the Three Bears (Tri Medvedev). This became our little home for the next 48 hours as we tried to fix a little niggle that had grown into a real problem with the hot water system in the van. 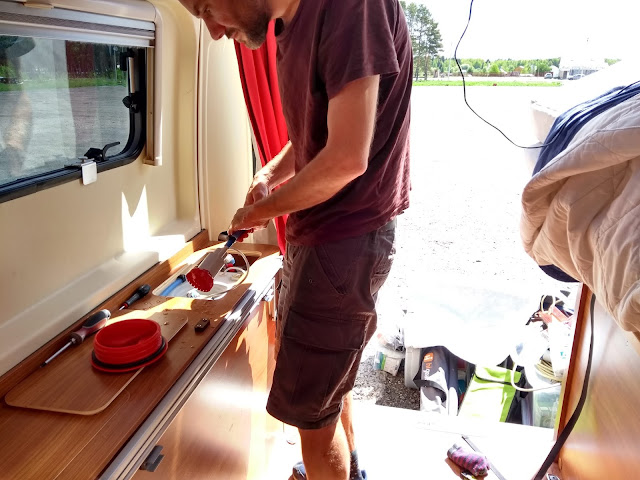 We had lost all pressure in the taps and I couldn't, for the life in me, work out why. So I set about dismantling various bits of the van looking for a leak or a clue. After ages and some bewilderment from our new friends Sadam and Nasim, the Tajik workers of the motel we pinpointed the problem the non-return valve in the water system. Luckily we had bought a spare in Holland. With the new valve fitted, we had a full plumbing again. Panic over. 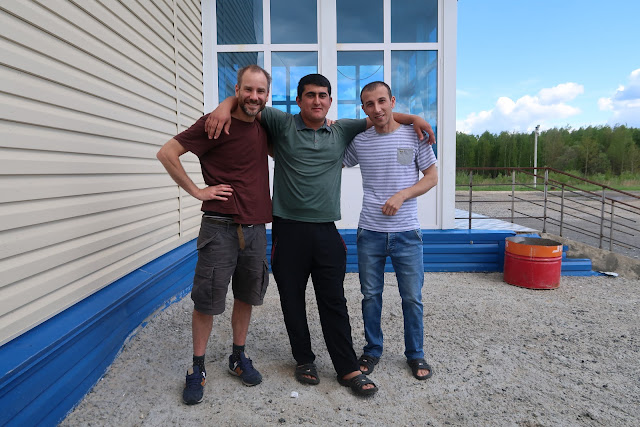 Later that day we headed to what was called a 'Geyser' on my map app. Unsure of what to expect we were very pleasantly suprised. Someone had stuck a pipe in a thermal spring, resulting in a weird shaped phalus splurtting 60-degree hot water into the air. There was a sandy pool all around it which was lovely to lie in, and we managed to find one bit of the shower that was ok to stand under. We had a right good wash. 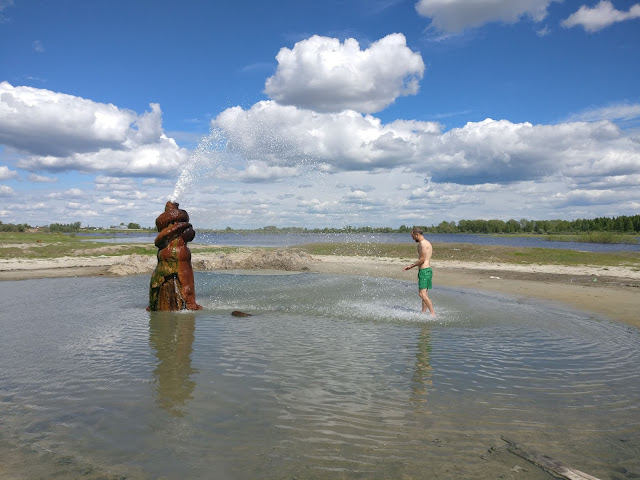 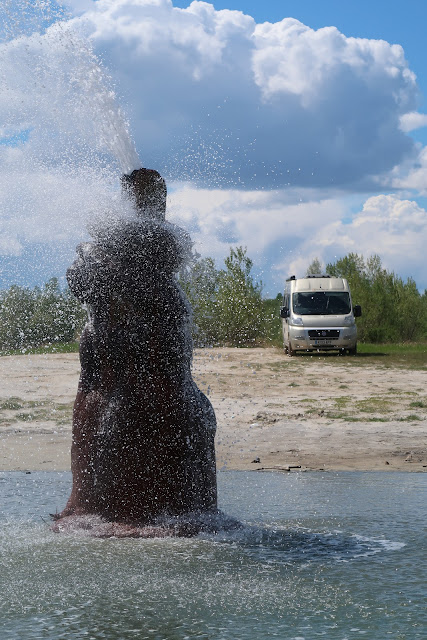 With dusk approaching we were again bombarded with mossies, so much so that just after getting out of the water, I had around ten of the little critters land on my legs and embed their horrible little tubey thing into my shins. Little bastards. So we decided to beat a hasty retreat back to see our new friends from Tajikistan and camp on the car park their motel. 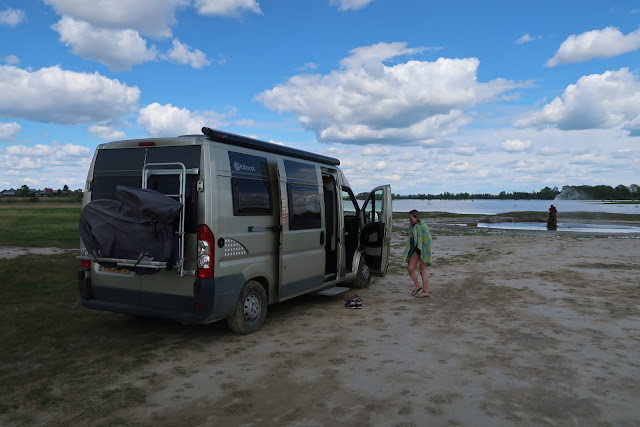 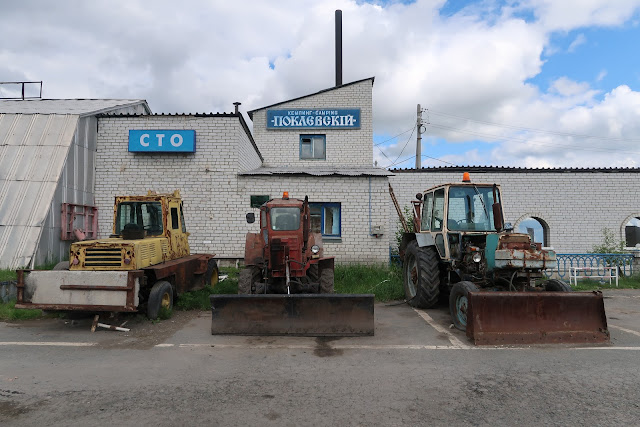 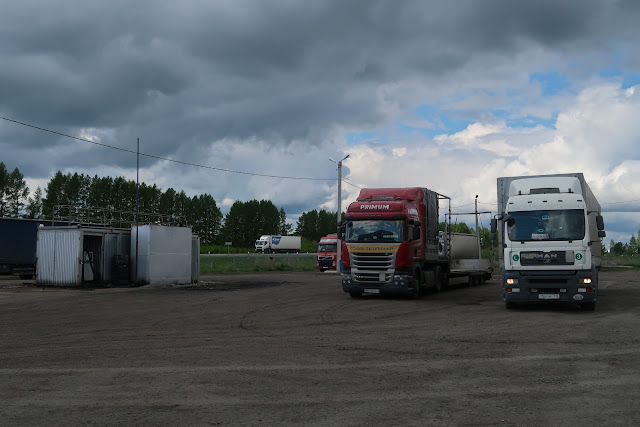 Next we had some crazy distances to cover. About 1000km to get us on our way to Omsk.
Asia Camper campervan hot springs motorhome Russia Tobolsk