Leaving the EU and crossing the border to the Russian Federation

Posted by Unknown on May 27, 2018
Driving through Poland and The Baltics, we were definitely now on our own – no more friends & family to visit en route to our first official destination – Russia. The visa application process had been so difficult and protracted, we still weren’t quite sure if we even had the right visas.

We were both pretty tense and nervous, but kept trying to reassure each other that it would be ok and, if the biggest country in the world didn’t want us, then we would get to Central Asia through Turkey and crossing the Caspian Sea. Jamie refreshed our minds reading blogs and forums about the border crossings. We had specified a crossing in Latvia on our original visa applications back in London but after reading all the comments and reviews on Google Maps we were seriously beginning to have second thoughts. They were all 1-Star reviews with comments like ‘Worst Staff Ever’ and ‘Took me 10 hours to cross’ so we started to look for other options. 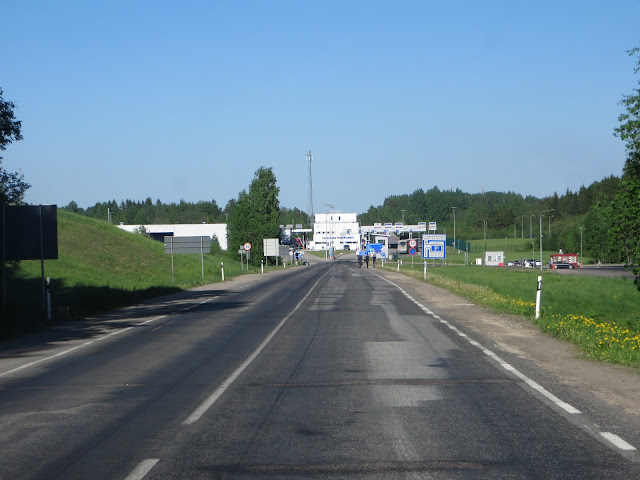 The Estonian border crossing about 200km north sounded much more organised (time slots booked online preventing queueing as much as possible) and even friendlier.
As we parked Dave Mooney (our van) at the Hulamaa waiting car park area, both our heartbeats started racing a little bit faster. We weren’t sure what to do, we wandered around the motorway service type building aimlessly, only to go back outside to see KX13 AFF flashing on one of the small digital screens in the car park. No turning back! We drove slowly to the Estonian border and waited in the queue behind EU nationals mostly Latvians and Estonians whilst Russian nationals, mostly young families, were waiting alongside us. After 15 minutes, our Estonian border guard was what would be considered very smiley. We opened all doors and showed her inside the van, opening cupboards. She seemed happy in a matter of just a few seconds and passed our passports to one of her colleagues in the cabin. After a few more minutes, we were handed our passports back with a very ominous ‘Good Luck’… Oh no, this part had seemed so easy, was the Russian border going to be that bad?

As we drove through a high-fenced-CCTV-secured-track to the Russian border, we both were smiling nervously. The first booth – a stern lady who gives us immigration slips to fill in but tells us to move up. We park up and fill them in.

We both come a bit unstuck when on the last section of the immigration form it asks for the purpose of our trip. We had applied for business visas as this meant we could stay upto 90 days but we were obviously not on business, So which answer do we underline: ‘tourism’ or ‘business.’ In the end we decide to underline “business” to not contradict our visa.

We shouldn’t have been so worried about it as there wasn’t any discussion about it once we got down to business. After checking our passports for a while and telling us to wait on the side, our dedicated border guard came to see us. We needed to do the papers for the van - “James, fill in form” “James, come here”.”James, why you want come Russia” With his broad Russian accent, but very good English, he seemed to insinuate he couldn’t believe why we would want to visit his country especially for so long! To this day, we keep laughing that he meant “James, Why you come to Russia and not Ibiza?

In the end we were through, from joining the queue in Estonia to driving out into the great Russian Federation in just under 2 hours. All we had to do now was to buy some insurance so we would be fully road legal. We had read this could be purchased at the first petrol station you come to. And sure enough, we pulled in at a Gasprom, marveled at the 49p per litre diesel and then set about getting the paperwork. 30 minutes later and about 50 quid poorer we walked out with the green card in hand.

We popped in our Russian sim card bought in Wakefield of a dodgy Moldovan Ebay Store, topped it up with about 7 quid and hey presto we had 15Gb of 4G data to see us on our way. So away we drove. The only thing now was to find somewhere to sleep. The nearest campsite was a good 100km up the road and with the time difference it was now getting on for 10.30pm. So we pulled into a LUKOIL and Sylvie very bravely asked the girl behind the till if we could sleep in our van on the forecourt. She understood and said yes, with a massive smile and a bit of bemusement.

We really were in Russia. Now we only have about 7000km to go. The distances in this country are totally crazy.