Posted by Unknown on April 12, 2016
We started our third week at Camping Le Moulin with a little treat... An afternoon off to watch Spotlight in “V.O. aka Version Originale” at the local cinema in Melle. The départment of “Les Deux-Sèvres” which Chef-Boutonne belongs to has a big British community. It may be one of the reasons why a few local cinemas and cultural houses make an effort to show films in their versions originales. We’d been wanting to see Spotlight on the big screen since we’d read about it a few months back. A hard and heavy subject to treat, we weren’t disappointed and were gripped by the unfolding investigation of the Catholic Church’s abuse of young children in Boston and beyond. 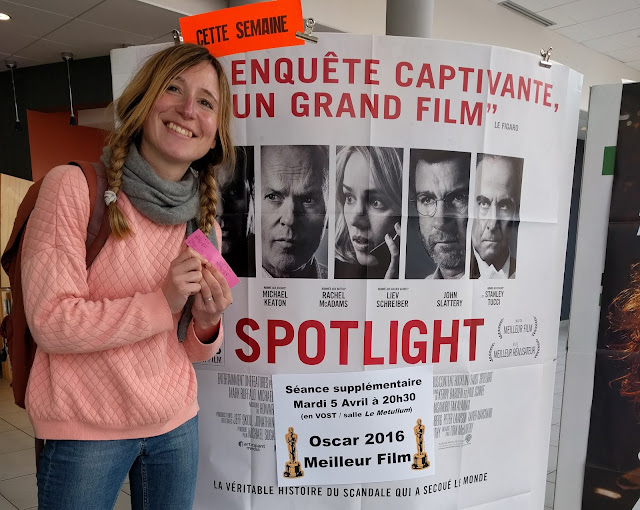 On the way back, as we’d taken “The Autoquest” for its first trip out of the campsite, we took the opportunity to do our first big shop in Aldi in Melle. It’s very sad, but we were both quite excited! Lidl aficionados, we had started shopping at Aldis too during our time in Spain in January and February 2016. Unfortunately, the Aldi in Melle wasn’t anywhere near as nice as the ones we’d been to across the Pyrénées. Fruits and vegetables had seen better days. And the great food staples we would normally stock up on; porridge, digestives, rice cakes, fresh milk, kidney beans and chick peas were non-existent!

Even though our Gaslow bottle wasn’t too low (now that we only use gas for cooking, it goes down very slowly), we thought we’d fill it up whilst out. The closest LPG station is at the Intermarché in Melle. Whilst I went in to look for a few bits, Jamie filled up... Or so I thought. The rude LPG/Petrol station assistant wouldn’t let him do it. “Interdit!” (Forbidden) was the word he kept shouting  at Jamie without any explanation. The more sympathetic Intermarché customer assistant apologised for her colleague, but told us that we couldn’t fill up our gas bottle as the local government (“préfecture”) has put a ban on bottle refilling in the Deux-Sèvres département. Only vehicle running on LPG can fill up at the pump. We have a spare gas bottle so we will be ok for a while, but we may try in Ruffec (22km away outside the département) next time around.

Back to work, we spent a day and a half cleaning the campsite’s main toilets/showers block from floor to ceiling, literally! We first got rid of many several cobwebs and leaves. Once we were ready to give them a good scrubbing; Alex, Camping Le Moulin’s French-chef-cum-cleaner-and-helper spent an hour with us showing us how to give the block a deep clean. We soon got it and after a few minutes the three of us were dusting, wiping, scrubbing, rinsing and moping walls, doors, floors and any other surfaces. At the end of the day, Jamie and I were well happy and quite proud seeing it all shining and gleaming. 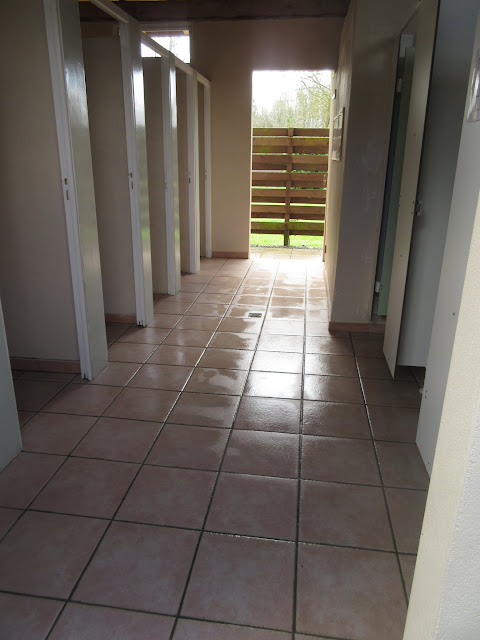 This week I started volunteering with l’Abri, an association helping homeless people in the area. Since November 2015, they have been assisting and helping out a Syrian family; Ibrahim and his wife Maali with their five kids: Dhiaa (11), Nour (10),Btoul (9), Ali (6), Ordanna (3). Andree Gerbaud, one of the members and founder of the organisation, has been behind their welcoming and integration in the area. One of the many things she has been able to set up for them is the creation of a network of people from the community able to give one hour of their time to help the eldest four children learning French. Each day after school, four volunteers are needed – one person for one child. Since January this hasn’t been always possible. This is where I stepped in; people were still needed on Wednesdays. With only two people on that day, they were struggling.

After speaking with some of the volunteers, Martine and Yves, we agreed that it would be good for me to come the day before on Tuesday when they help out. That way I’d be introduced to the family and be able to see how it all worked. I was only meant to be there to watch and observe Martine, Yves and Odile working with the children. As Odile couldn’t make it, I ended up studying with Btoul. We worked on her CM1 exercise book which she only uses at home to practice and learn French.

On Wednesday, from 5.30 to 6.30pm, I met Florence and Cathy, both teachers. This time, I worked with Nour as Cathy was with Dhiaa and Florence with Btoul. Although Nour didn’t have the same facilities as her sister, I was still amazed by how quick they had been able to learn the language. They could all understand most of what we were saying and even translate to their parents, especially their mum. Maali learns French three days a week and although she struggles with the language, she makes a real effort in being our host, welcoming us all with homemade tea and cakes! I can’t wait for next time, and maybe get to know a little bit more about their journey to France, but I’ll have to wait another two weeks as our services are not required during Easter holidays.

Back to the campsite’s affair, one of our jobs this week was the playground: Stuart had turned over the play area’s earthy soft ground with his digger so that we could clear it out of big roots and weeds. It was hard physical work shoveling and raking for four hours and a half. By 2pm, we kept taking shelter as it rained on and off throughout the afternoon. Every time we thought we had finished, and were starting to smooth the ground, we kept pulling out more! As Stuart came out and was more than happy with the work, we had to call it a day and finish.

On Friday evening, our services were required for the first time at the campsite’s eatery; Restaurant Les Canards. A group of 17 French people from the area had reserved a table. Stuart could have handled it on his own, but he thought it would be a nice introduction rather than a hectic baptism of fire.

The attire was smart casual. Although jeans were allowed, it meant no trainers for me as I’d be serving too. Stuart said: “You know, wear some black smart shoes or something”. This wouldn’t have been a problem if we lived in our own home. However, when we left travelling, we only brought a minimum amount of clothing including footwear. I do have a pair of smart black shoes, but they’re opened black sandals with heels. The only other smart pair I have are some colourful pumps or my New Balance. Unfortunately, after checking with Sarah, the latter were off limits so Hawaiian pumps it was!

It didn’t look too ridiculous in the end and I mostly helped out in the kitchen plating the dishes whilst Jamie was assigned to the washing up station. We did swap jobs and try our hands at everything. It was nice to work with Alex and Sarah and get to know them a little more. It wasn’t too frantic in the kitchen. We had time to chat and had some great laughs altogether. We spoke a bit of French too so that Jamie could practice. It was a lovely working environment. By the end of the evening, we retreated back to the van happy and content.

We were stranded in the van waiting for the rain to stop in the morning. We finally got out after a couple of hours and started some very muddy work - weeding the entrance driveway. Stuart had scraped the edges with his digger; we just had to pick the pieces. Meanwhile Stuart and an arborist cut a dangerous tree down. We finished our hard work with our free meal of the week at the campsite’s restaurant and drunk until late. The food was delicious, this time we chose dishes from the À La Carte menu. The arborist, Dave and his father-in-law, Chris came in later on as a family. Friends of Stuart and Sarah, we ended up drinking until late altogether at the bar. It was a fun, relaxing evening. Feeling a little bit tipsy, I had to leave that little bit earlier, happy and merry! 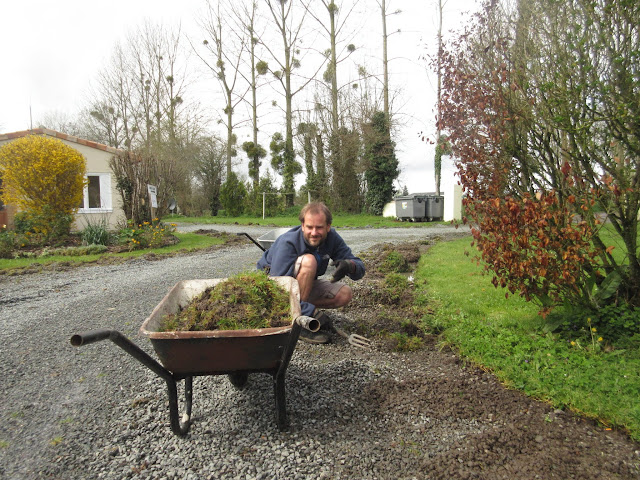 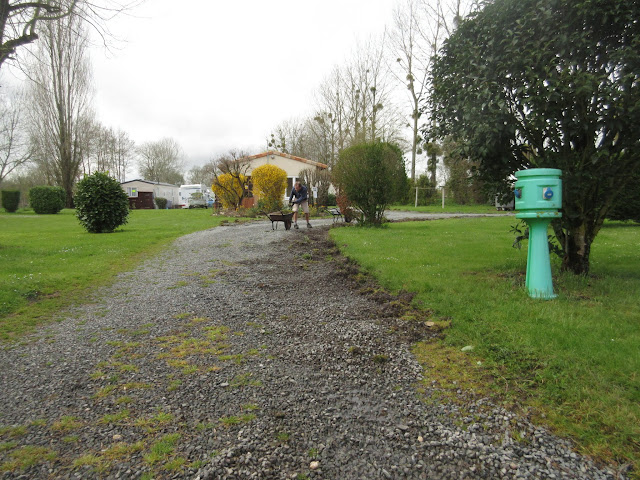 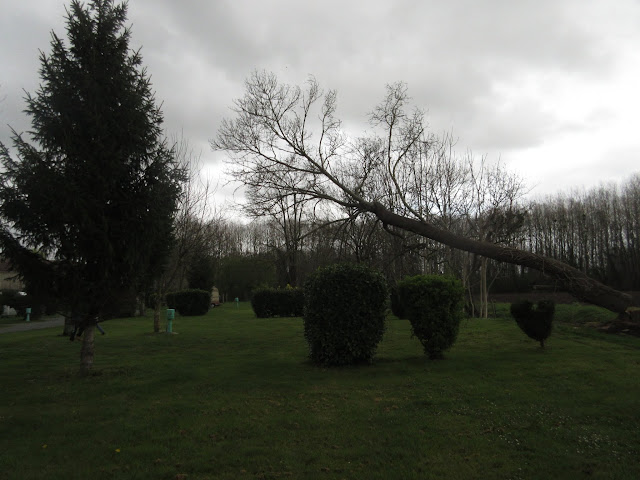 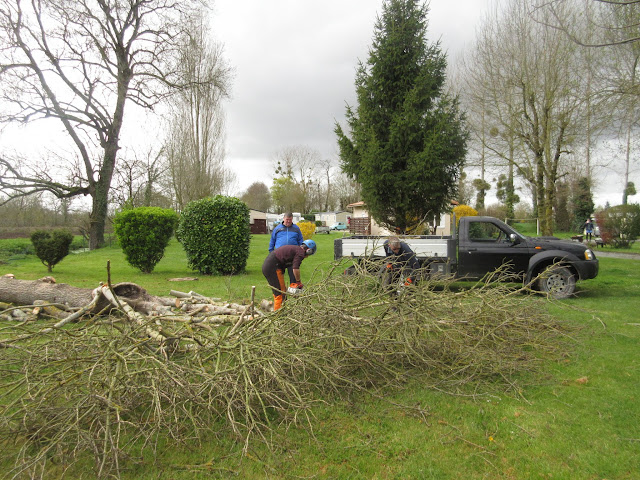 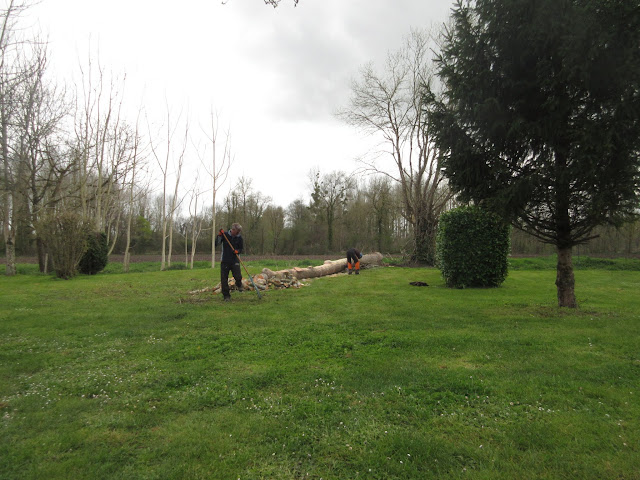 And Sunday it was. I wasn’t sure if we’d be able to wake up to go on a nice bike ride on our day off, but we did! We cycled to one of the many villages in the area; Sauzé-Vaussais through smaller villages and many fields. It was a nice and quiet 40km-ride. We felt tired in the end, but it was nice to be out. Next week, we might try to cycle to Ruffec, weather permitting! 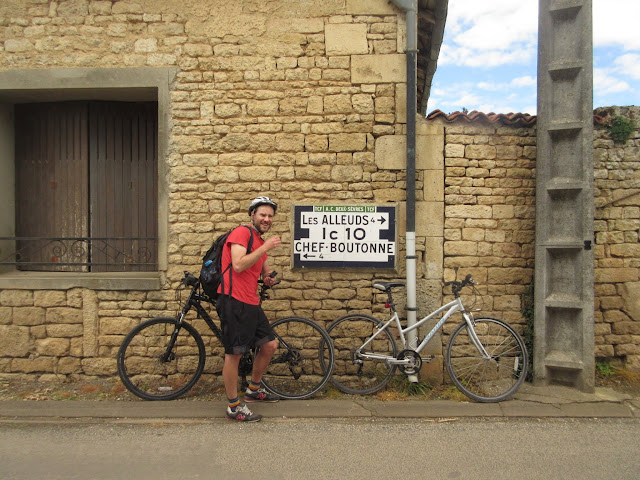