Turkey in a Motorhome - Part Two: Mamure Castle to Cappadocia

Posted by Unknown on November 30, 2015
We had a nice time relaxing on the Mediterrannean coast in Kaş (see our blog: Turkey In A Motorhome Part One: Gallipoli to The Mediterranean). As opposed to its neighbours such as Fethiye or Kalkan, Kaş has kept the charms of a little fishing port town. We enjoyed going to the market on Fridays, walking through its cobbled streets and main square and eating out at one of its many nice eateries! After a few days, it was time to go if we wanted to do our tour of the country and go as far East as we could. We continued a little further on along the coast, wild camping the first night off the D400 on a beautiful pebble beach. We stopped en route to take a look at some of Turkey's very own fortresses. Although Mamure Kalesi (castle) was shut for renovations, it didn’t prevent us from walking around its imposing walls, taking in its sheer size. And scrambling on the ruins of the smaller Corycus with panoramic views onto the sea was wonderful. Passed between hands through centuries, the castles foundations dated as far back as the Roman Empire once the strong sea enclaves of prosperous harbour towns.

I must admit that I had been quite shocked to see already a lot of women young and old wearing veils, even swimming with the full “burkini”; cafes’ terraces full of men smoking and sipping coffees; and so many new minarets sitting next to older ones. I had thought Western Turkey would be more liberal, but it had seemed quite the opposite if it wasn’t for the exception of the more touristic resorts of the Mediterranean. I had imagined that this would be true, the further East we would go, it appeared not so. Talking to a few locals, we learnt that Erdoğan’s government was bringing back a more traditional and conservative Turkey. Building new mosques for example in small towns and villages instead of much needed schools and health infrastructures.

We said goodbye to the sea, we knew we wouldn’t see it again for a long while that is until we’d get to the Black Sea coast, a long way away. Inland it was and a first stop to the extraordinary formation of the dramatic-sounding name of the Cave of Heaven and Hell! Walking down the many slippery steps of the chasm of heaven was a tricky situation, but the plunging view from the tiny Chapel of the Virgin Mary carved perched atop the rocks onto the cave opening was worth the detour and all the sweats. The best was to come though, whilst the popular Cave had been busy due to October Turkish national holiday, the ancient ruins of Uzuncaburç were a stark contrast. Laid in the middle of the tiny village of the same name, surrounded by olive trees and atop a dry valley, it was a very quiet and peaceful setting only disturbed by our very own footsteps. Elderly locals and children playing by the entrance smiled at us. There were no entrance fee, we were free to roam. 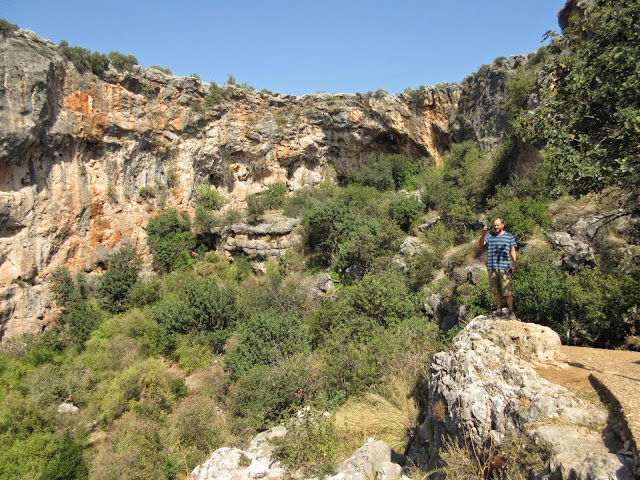 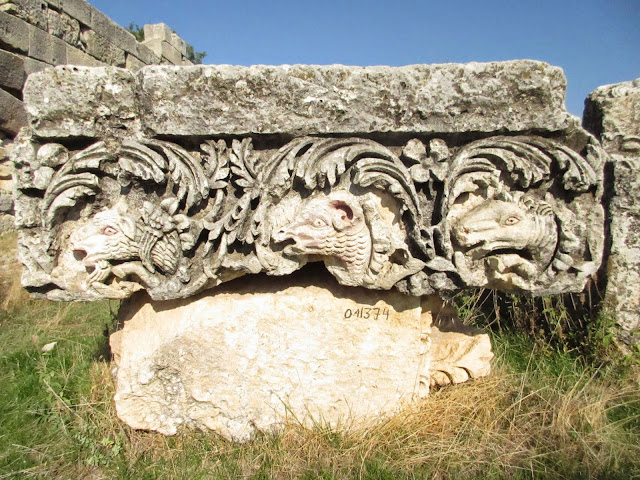 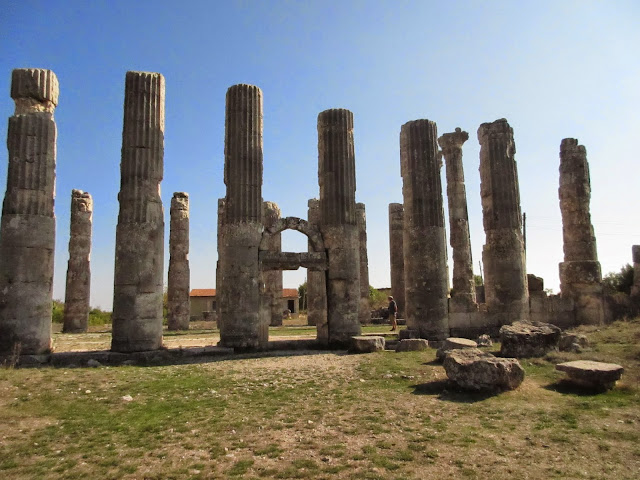 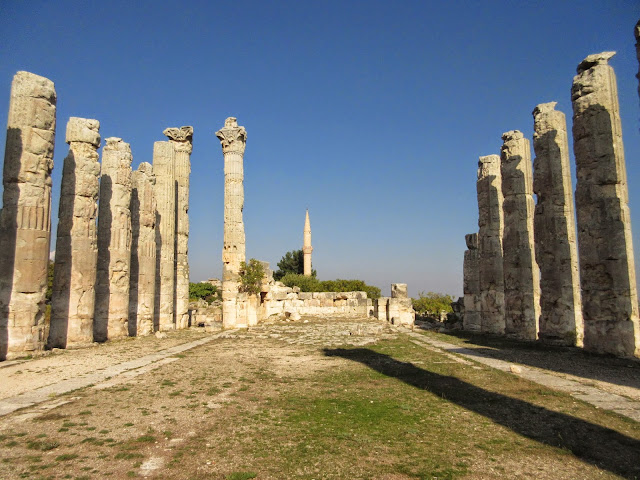 That evening we slept by the side of a beautiful canyon off the road 57, read our brief review of this wild camping spot. We’d been climbing since road 33, passing small villages. The next day we “zigzagged” through dramatic landscapes from rugedy rockfaces to arid plains on road 330. On our route, we stopped at what must have been one of the first “aires” of the medieval ages; yes, nomads, traders and explorers  travelling to Europe coming as far as Asia Minor could stop at the 13th century old Sultanhani caravanserai where full first class amenities were at their disposal; shops, kitchen, toilets, bathroom, sleeping rooms and a mosque. 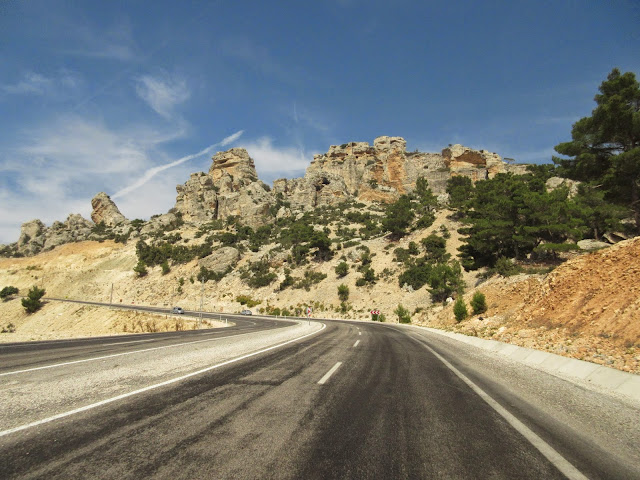 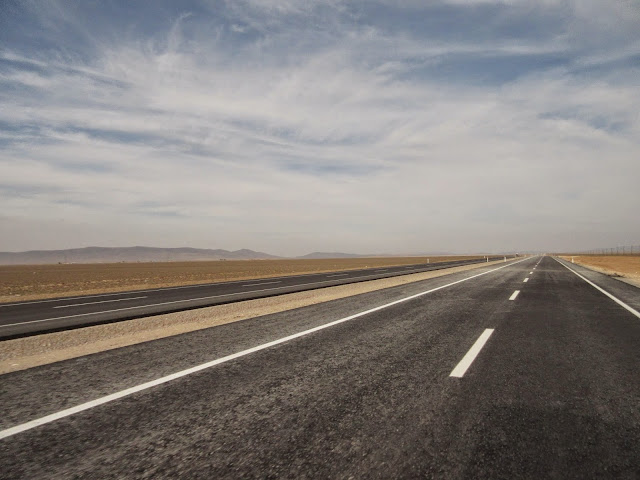 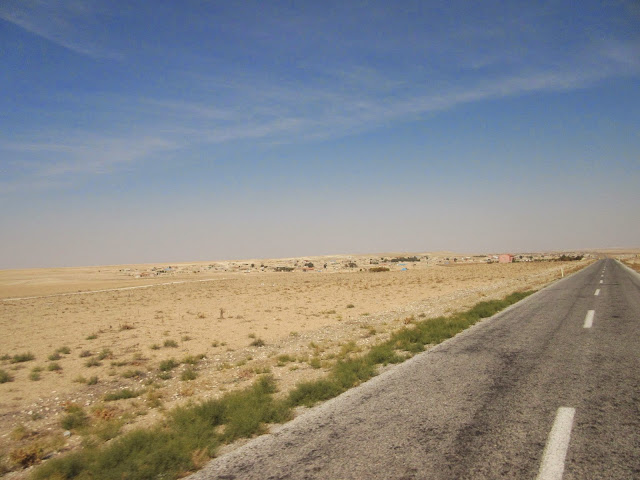 We were on our way to Cappadocia and looking forward to stay at Kaya Camping after not so great experiences when we were last down by the sea at a very run down campsite-cum family house by Kizkalesi Castle. It had everything to be great; by the sea with even historical ruins on its ground and right by the castle, but the family owners didn’t seem to have the resources and even the will to make it to normal standards. Then it was Kervan Camping in Sultanhani where we regretted eating; the food was not so great and overpriced and its French-speaking owner wanted us to drink. As the evening went on and he was sat with us, he even asked us if we wanted any cannabis and offered us to go to a wedding reception. It was all a bit weird.

Cappadocia is a big area in Central Anatolia, most of the famous pictures you see from the region are the ones surrounding its main touristic centre in Göreme, but there are other valleys with similar weird and wonderful geological formations and whole villages and churches carved into rocks. We explored Selime in the Ihlara Valley. What one would imagine a miniature Cappadocia – rows of fairy chimneys, a full “Han” (caravanserai) carved into the rockface and its dramatic Chapel of Virgin Mary built on a mountain drop. A few mini-buses full of tourists were there, but this was nothing compared to the queues and coaches-load of tourists we saw a few days later visiting the bigger, but similar site in Göreme. Seeing the crowds in the distance made us run away! 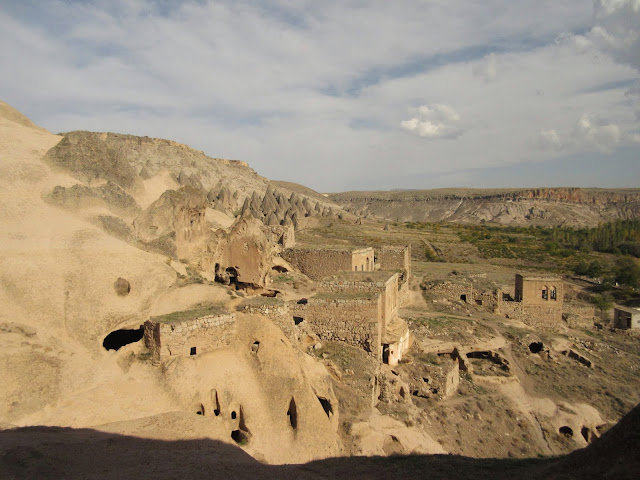 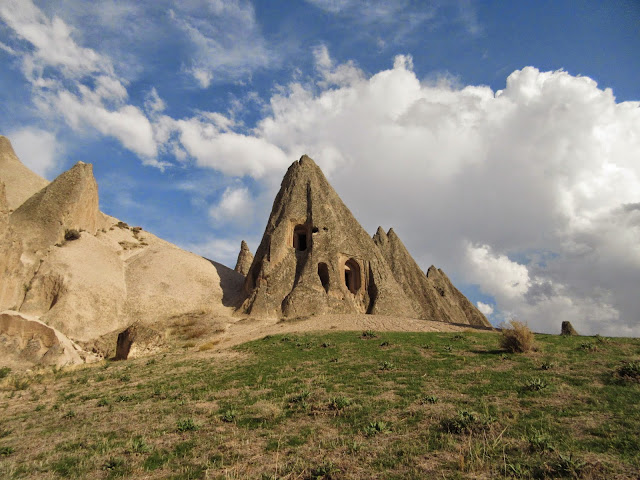 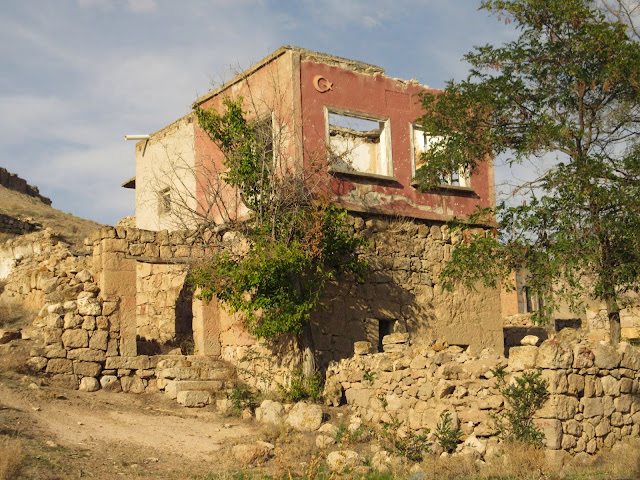 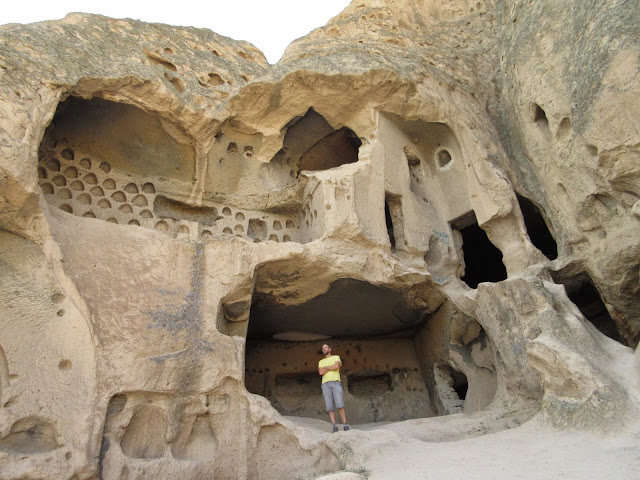 Göreme was still busy in October as we discovered and, although Kaya Camping wasn’t just for ourselves; other motorhomers had had the same idea as it seemed, it was quiet. Nearer to Ortahisar than Göreme, the campsite was a few kilometres from the bustle and hustle of the main touristic attractions. On a hilltop with views onto the Red and Rose Valleys, it was a beautiful and peaceful location. Highlights of our five-nights stay, included a 27km cycle ride taking us through the Red, Aviçlar and Love Valleys. The latter takes its name from its rather erotic geological formations; dozens of giant chimneys shaped as penises! Walking through the little village of Ortahisar and climbing up to its vertigo-inducing rocky castle was another memorable experience. 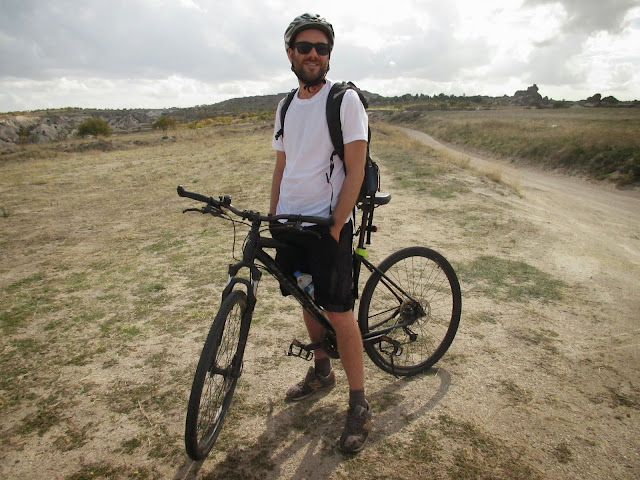 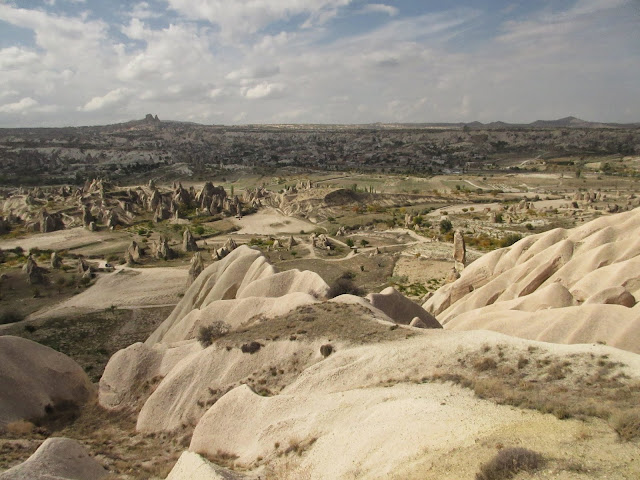 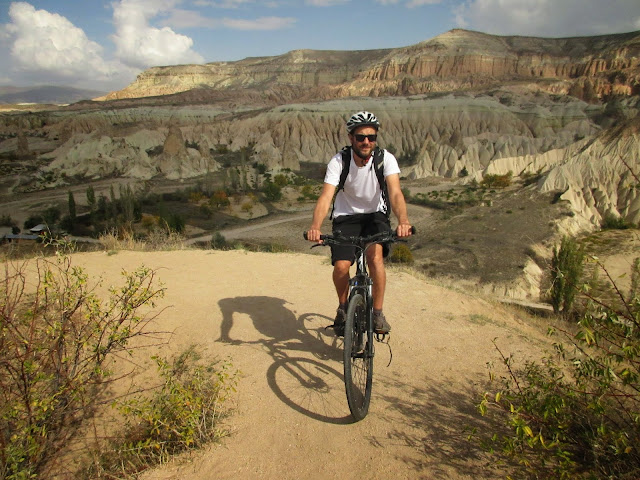 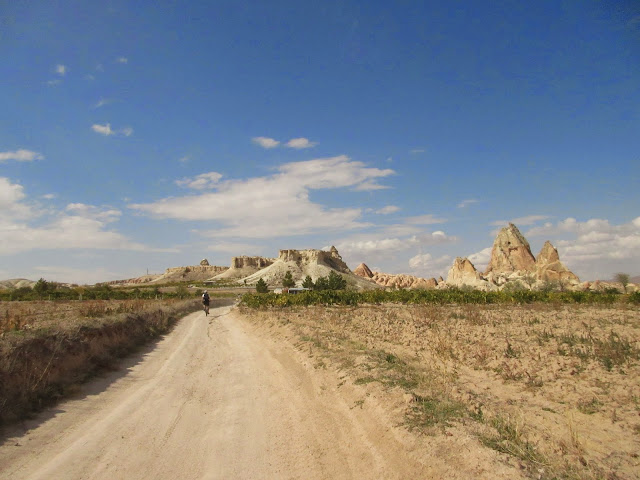 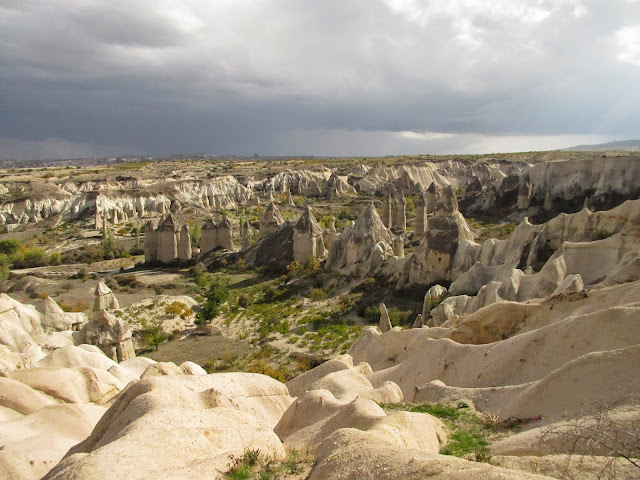 Jamie and I try to be informed travellers regularly reading news reports, listening to the BBC World Service and looking at Twitter. Even more so in Turkey, with Syria just around the corner, we found ourselves checking the foreign office website on a regular basis. Leaving Cappadocia and going further East, we agreed to always keep a safe distance away from the Syrian border and to head North if we were to hear of any troubles or dangers from locals themselves.

We did a lot of washing before leaving Kaya Camping planning ahead as campsite would be few and far between in Eastern Turkey. We spent the next couple of days driving up to the Central Anatolian plateaus, we wild camped, parking Izzy, The Motorhome at altitudes of 1500m and 1750m. The average day temperatures of twenty degrees we were lucky to experience in Cappadocia were well and truly behind us. We traded shorts and T-shirts for the full Winter ensemble.