Posted by Unknown on September 09, 2014
After discovering the emptiness and solitude of the Western Sahara, we were yearning for more civilisation, but were dreading the built-up areas and motorhomers en masse (the Moroccan Atlantic Coast is a prime campervanners location in the Winter).

Yes, it was built up and yes, it wasn’t the fantastic landscapes we’d been spoilt with in the Middle and High Atlases, but we found some weird and wonderful stories, beautiful quieter corners  and vibrant towns and cities.

First up, Tarfaya, a small town with an air of desolation – a town on the edge. Even though construction works are going on, there is a permeate feel that it has been abandoned. Once a hangout place for Antoine de St-Exupery and his pilots, the only remaining sign of the former is a small under-funded community-based museum. No glamorous displays, but framed posters about his time running the first airmail routes between France and Morocco with Aéropostale adorn the walls. 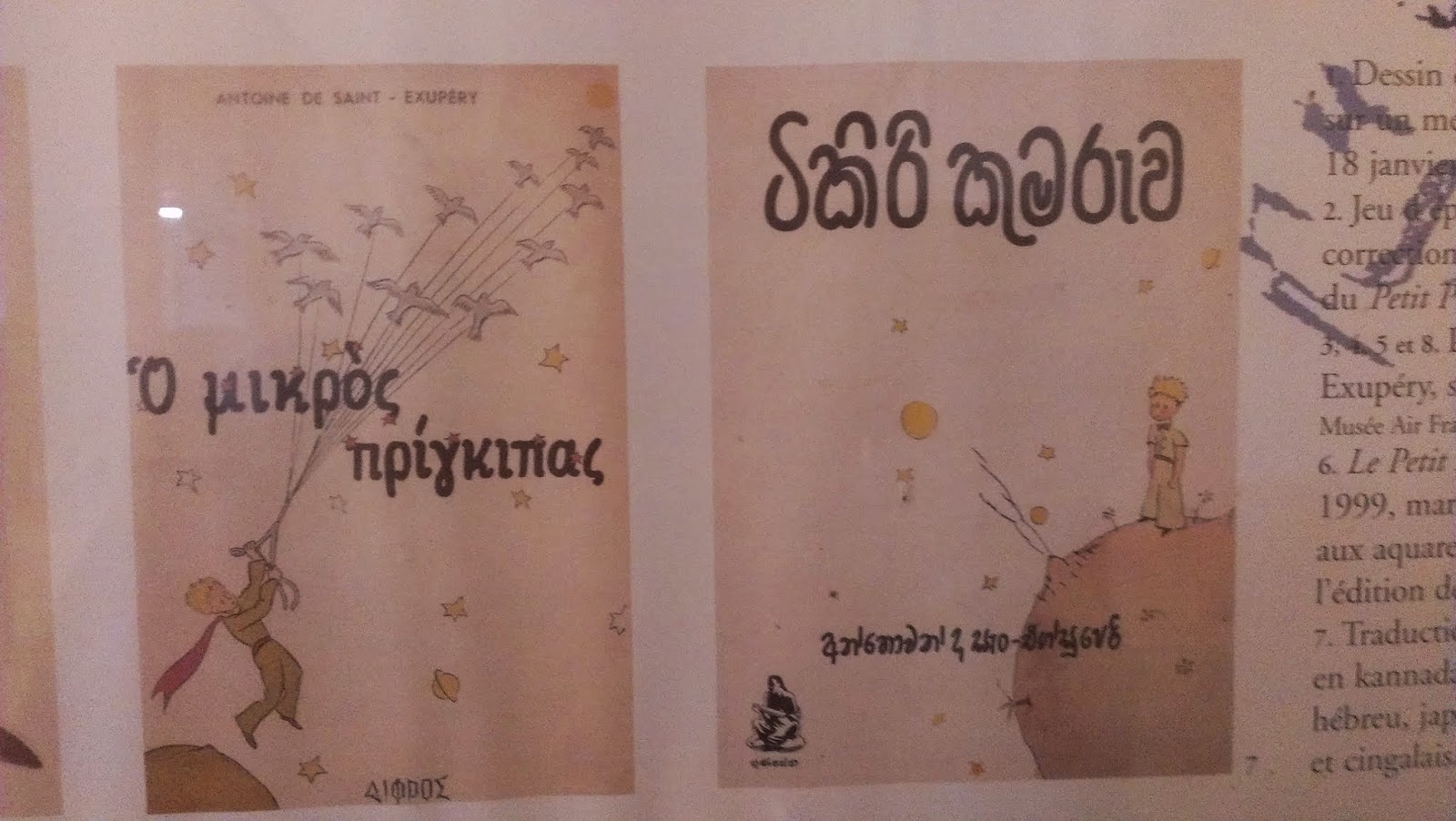 A passenger/car ferry wreck and a doomed literally-built-in-the-sea hotel pertained to this air of desolation and bygone roaring 20s. It might have never been on the map though, it may be a coastal town in waiting – waiting for its saviour, the person who will bring it out of the brink. 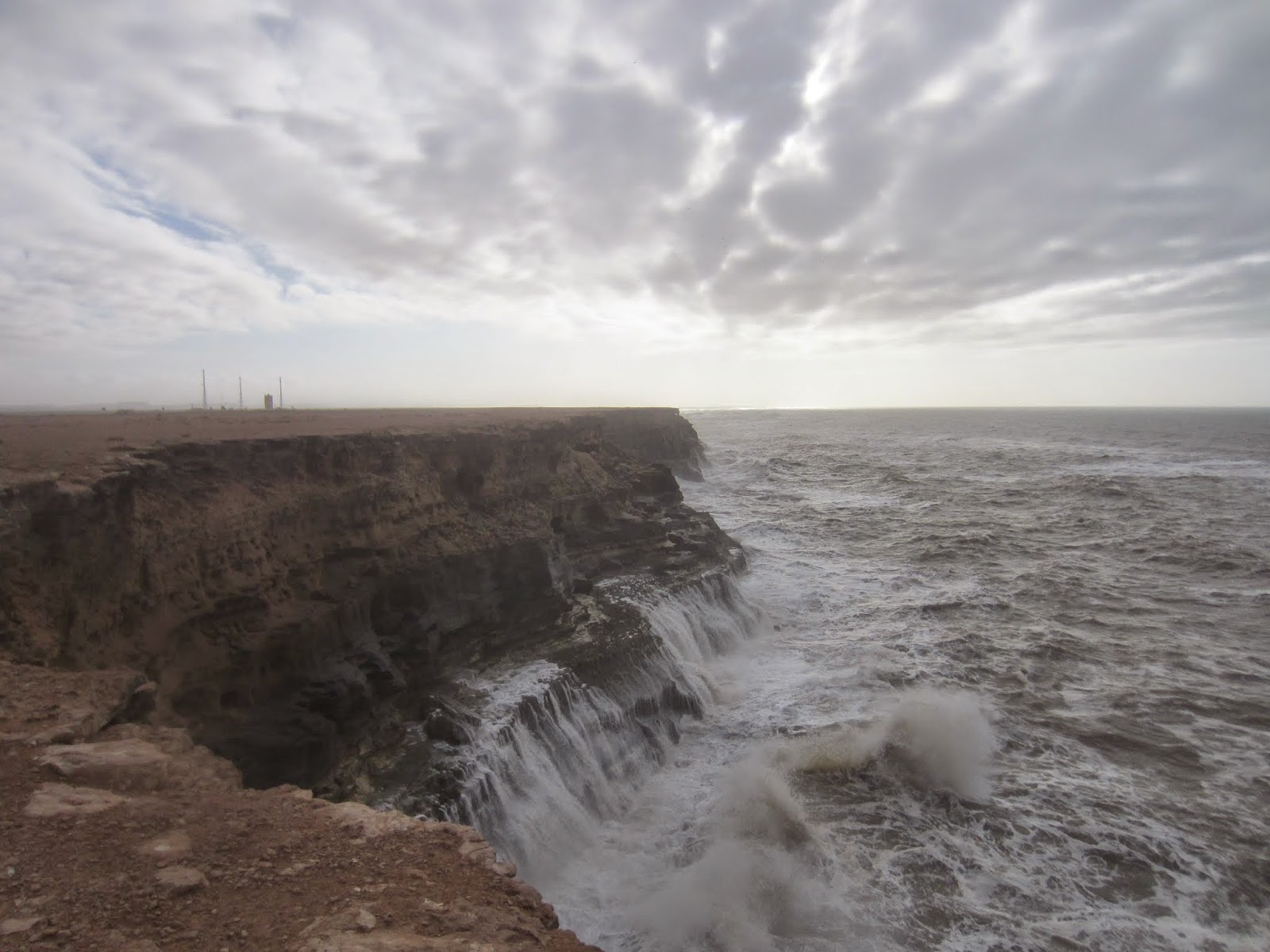 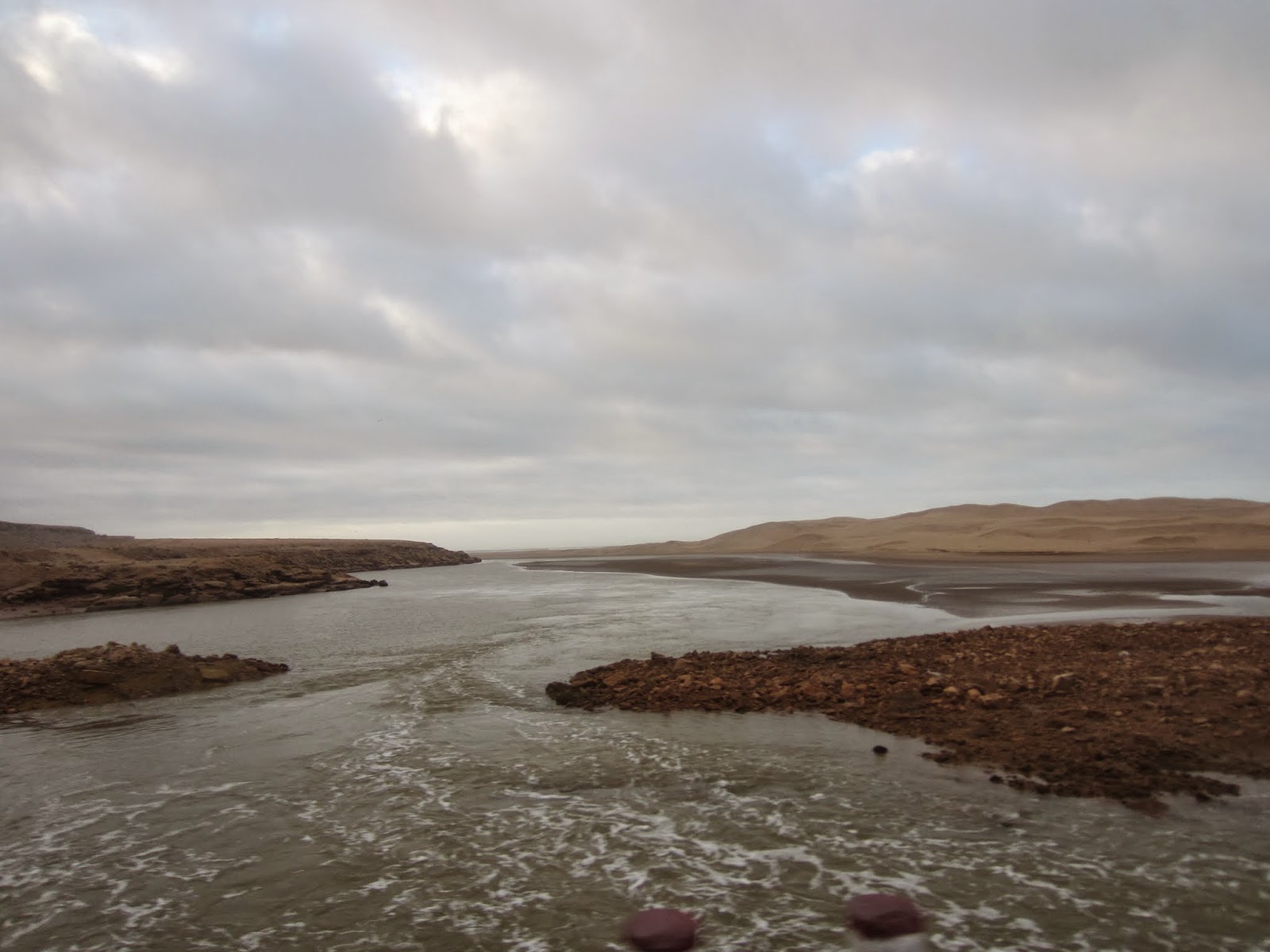 After three nights “off roading” it, it was clear that finding nice wild camping spots was that little bit more difficult. Sidi Ifni may have been very pretty, but its huge campsites weren't so inviting. The famous surf spots were too built up. It took time to adjust. We had nearly come to one of these standstill – we were in need of the full lot – electricity, water, toilet emptying, showers and washing. Jamie had been complaining on and off of an earache too. We needed to base ourselves for a few days . Get off the road and recharge our batteries. Camping Esprit Nature (click on the link to read our review) was our solution. 18km from Essaouira, run by friendly French owners Séverine and Patrice, in the middle of olive tree fields and farmlands. A boutique-looking campsite in Morocco – it was too good to resist.


Camping at Esprit Nature lived up to our expectation and more! It was a truly wonderful find. Probably too far from Essaouira to be fully packed, we enjoyed our four nights in peaceful surroundings. Unfortunately, our stay wasn’t all that quiet. Jamie’s earache didn’t pass as we’d hoped. On our second day, paracetamols couldn’t mutter the now unbearable pain and barely brought him to sleep on our third night. A doctor had to be called. Séverine made it happen – a brief discussion about our problem and here she was calling and texting her practitioner, in Essaouira and arranging transport with the local taxi driver. We couldn’t have hoped for better help and support.

Dr Toufelaz was a young private doctor consulting in his own residence. Sat in his lounge-cum-consultation-room, we were witnessing how the young Moroccan middle classes lived. Comfy black leather sofas, modern paintings, huge HD plasma screen with the latest home surround sound system and built in DVD player – it was a Morocco we hadn’t seen before. We talked in both French and English, fortunately Jamie was able to communicate and explain the horrendous pain it’d been having. A few questions and look at the infected ear, Dr Toufelaz knew what the problem was and what to prescribe; infected cist in Jamie’s ear – disinfectant/anti-inflammatory/painkillers were needed. Jamie took some straight away.

Both the relief of having had a diagnosis and taking some medications worked their magic or just that little so that Jamie was well enough to wanting to walk around Essaouira – Morocco’s windy city. Promenading along its sandy beach, its old fishermen’s port adorned with lines of wooden blue boats and its souqs, we liked the atmosphere. It felt cool and down to earth. We stayed until dark and rung our taxi back. 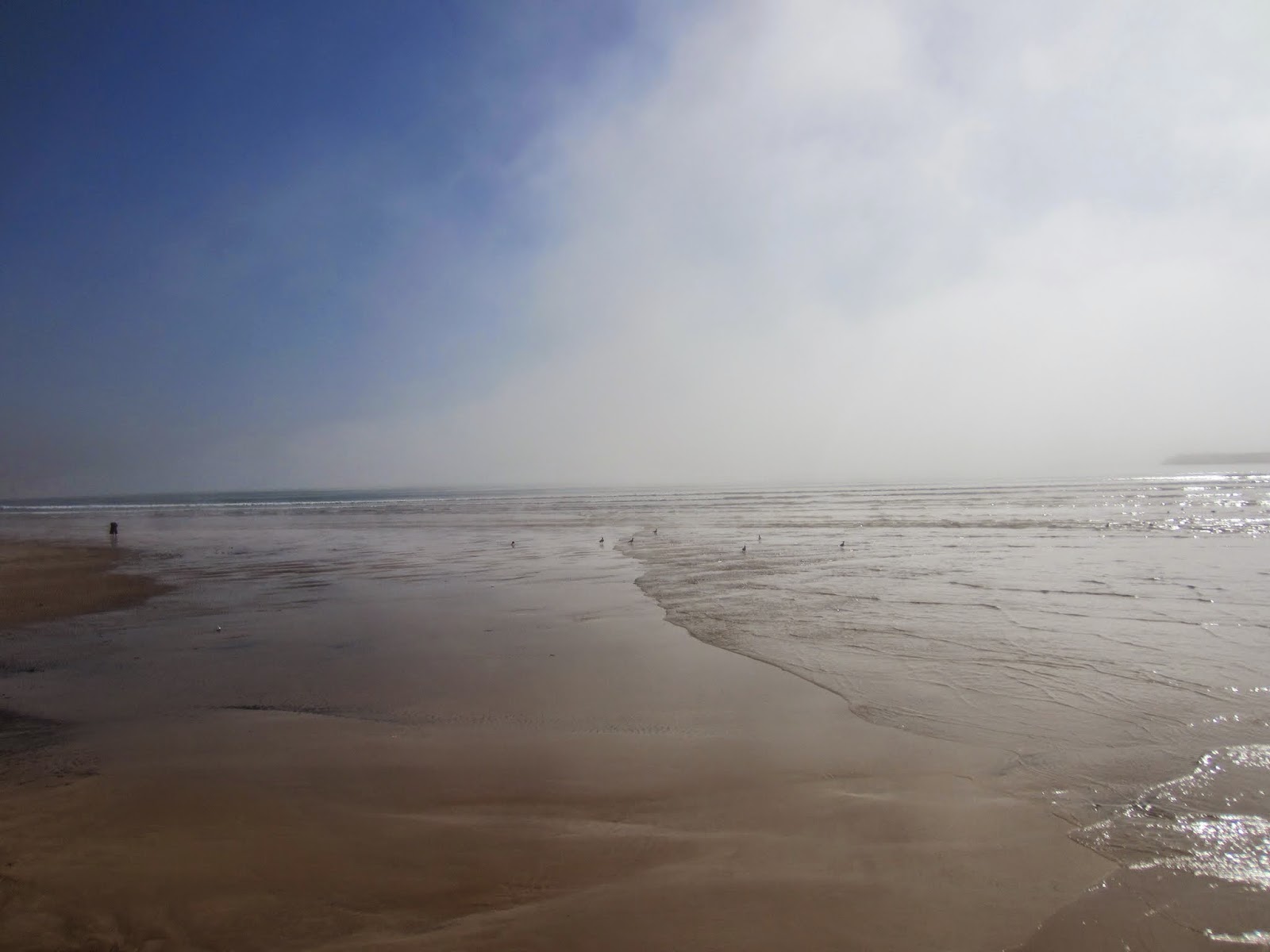 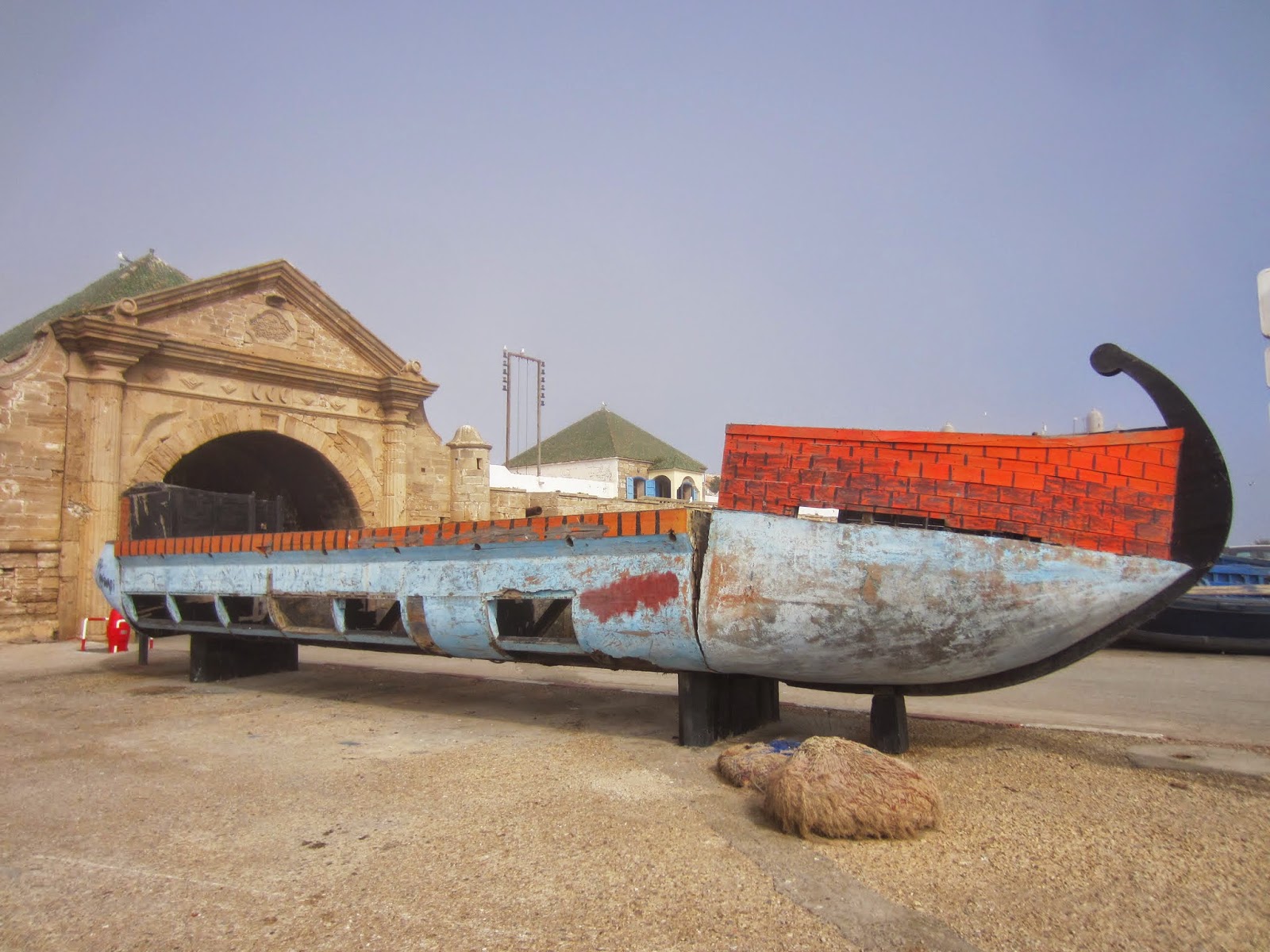 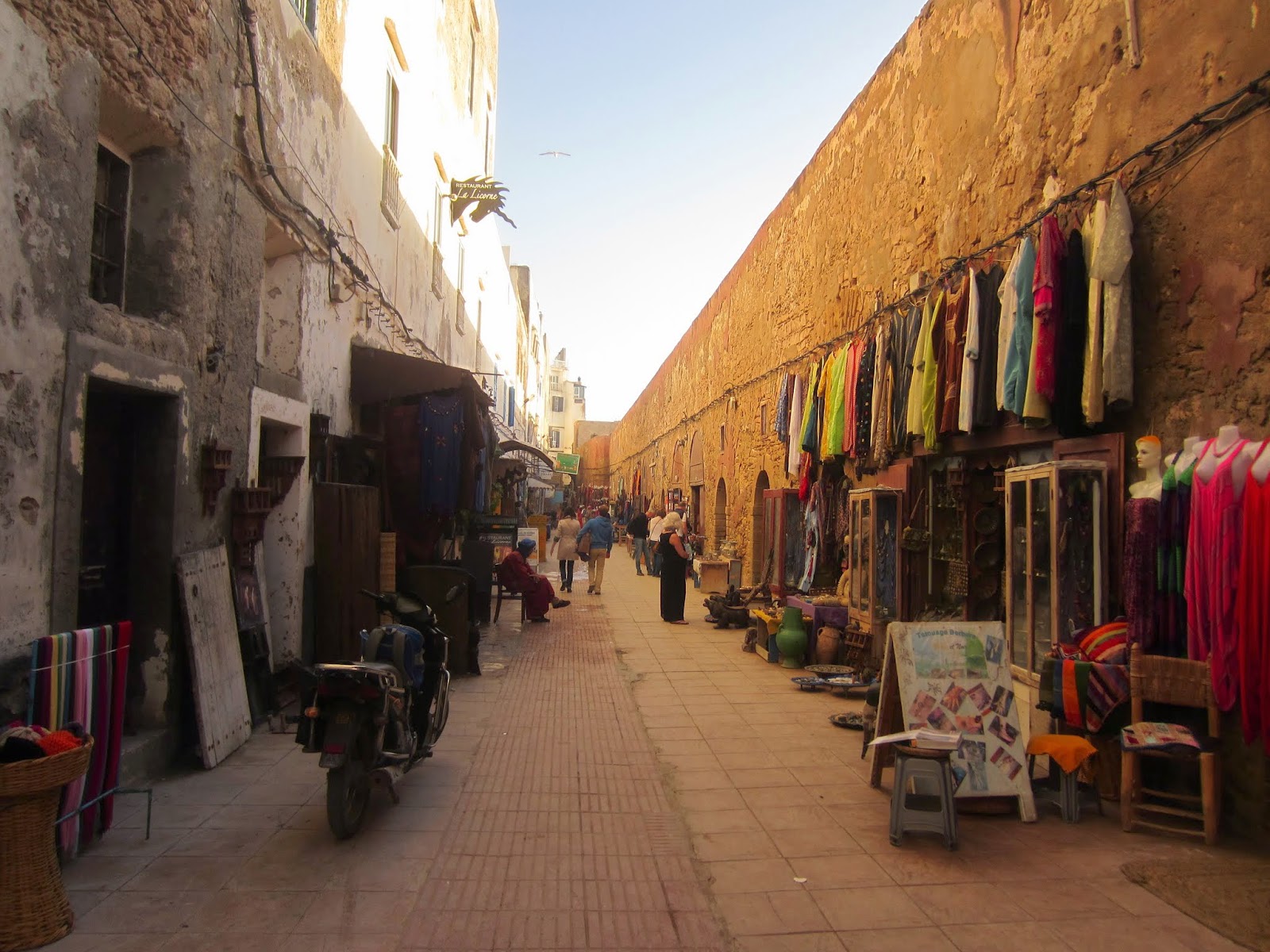 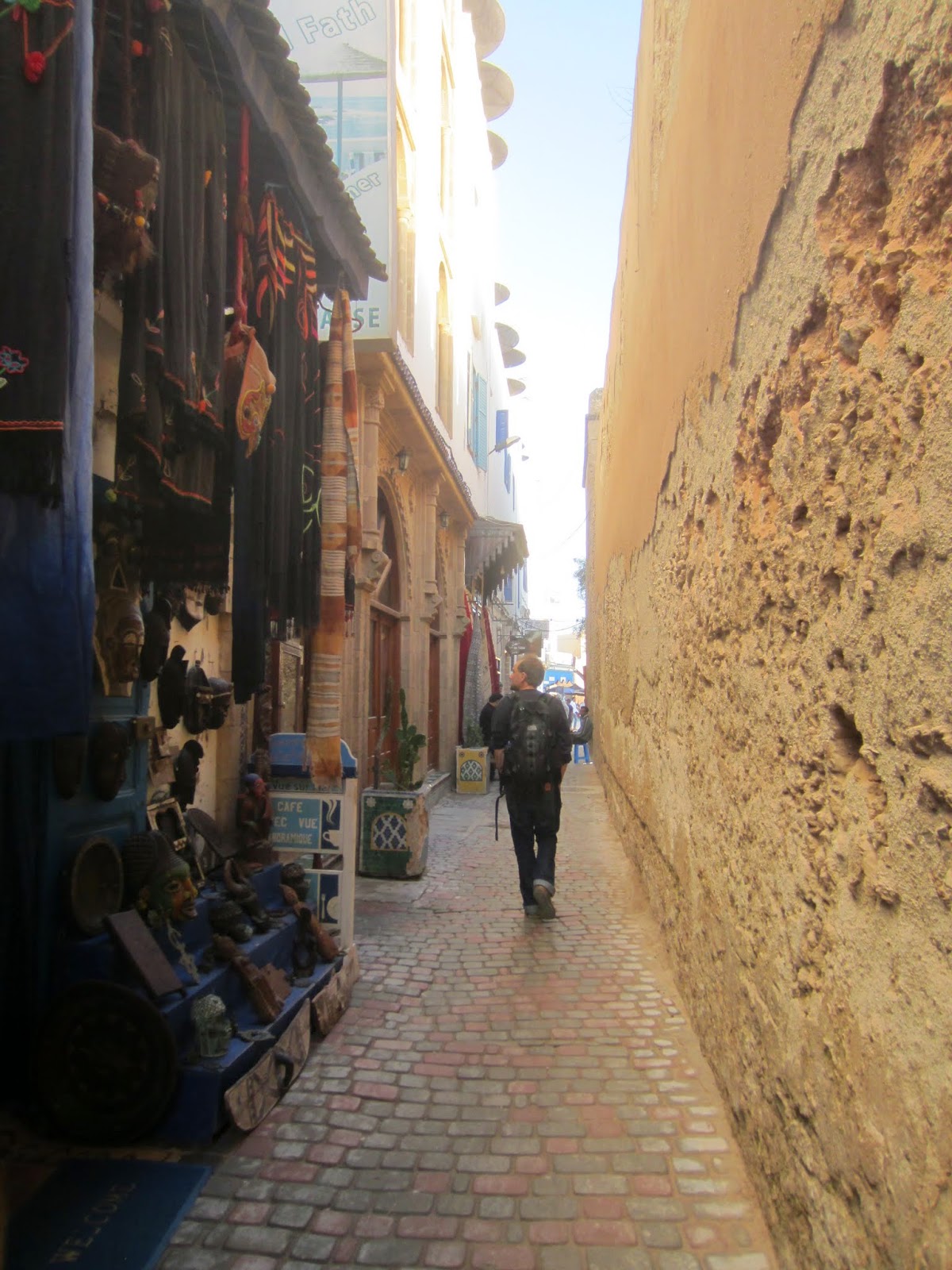 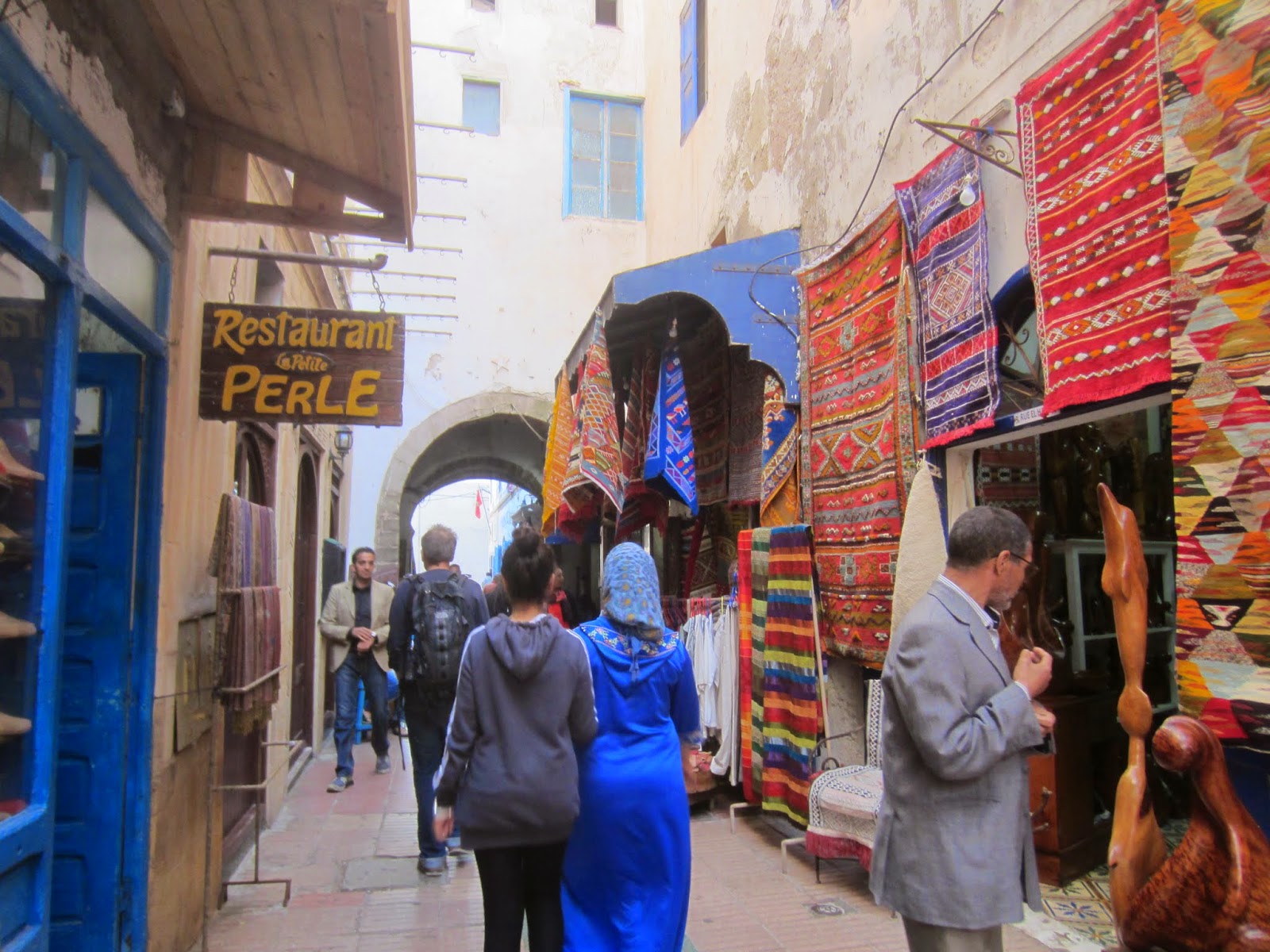 The next day, Jamie was well enough to go on a short bike ride around the area. We packed our lunches and went to explore one of the slowly growing trends in Morocco – a Fromagerie, "La Fromagerie Kalamak". Making cheese is becoming more and more popular across the country. Local communities, farmers and cooperatives in Morocco are learning the methods and starting to make their own produce. Abderrazzak Kouhbbane’s one of the few who has decided to give it a go. With his family, they produce both cow and goat’s cheeses of different tastes and strengths which they sell to individuals and serve at their garden restaurant. After degustation, we left with two cheeses and free samples – well packed for a few weeks ration!

Leaving Esprit Nature was sad, but we thought it’d been time. We needed to move on and continue our journey closer back up to Western Europe. 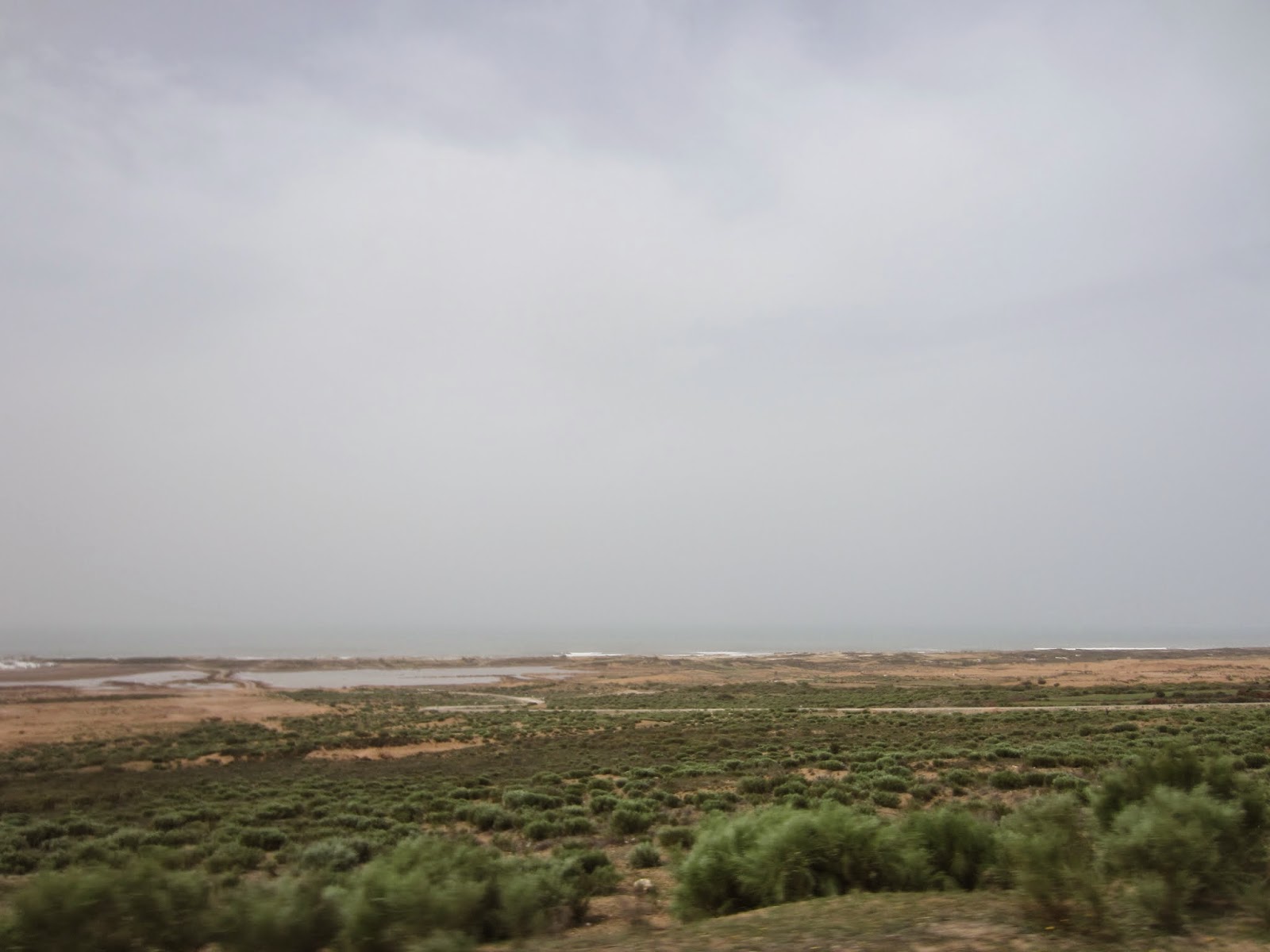 But next up was Oualidia (click on the link to read our brief review of our stay there, 7th bullet under Morocco), a small lagoon where we wild camped for the night . We had been driving for a while and looking for a nice spot near the lagoon. We spotted a track down to the water off the main road. Unsure, we drove down the steep track leading to an oyster’s factory/distribution centre, “La Princesse des Huîtres”.  It seemed shut at first glance, but moments later a camionnette drove down and parked next to the building. I sheepishly asked if we could stay and was welcomed with a “Oui, Madame, bien sur, pas de problèmes!” The man was the manager and happy to let us camp for as long as we wanted. We only stayed for the night and explored the lagoon and the small town on foot in the morning. It was beautiful.

As we’d woken up early, we went on to visit Azemmour in the afternoon. What a feast for the eye! The huge colourful and wonderful graffitis adorning the walls of the old town are worth the detour. More like frescoes than graffitis – it was not vandalism, but a celebration of Azemmour and its artists in many different styles, forms and colours. Just look at our pictures... 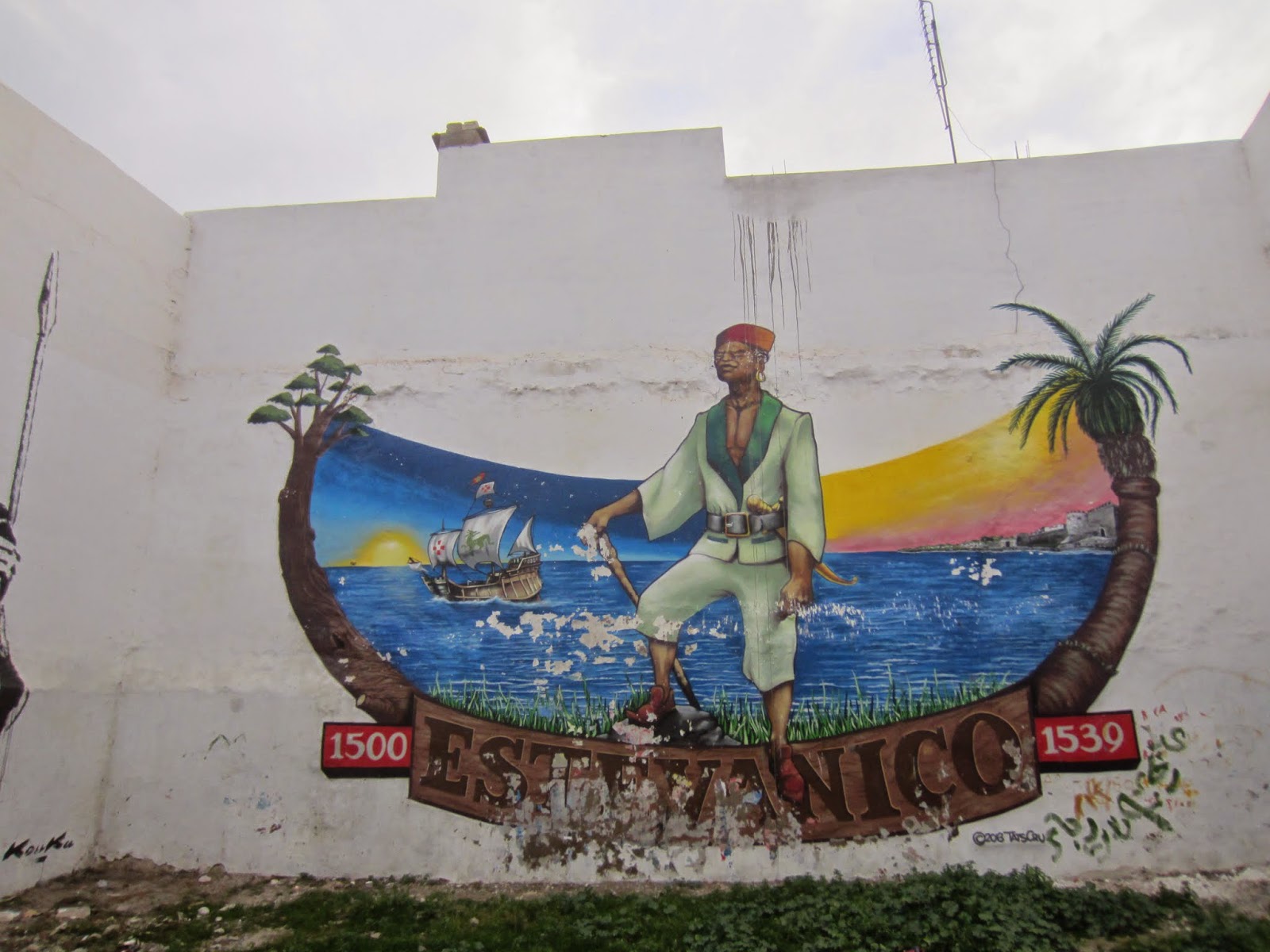 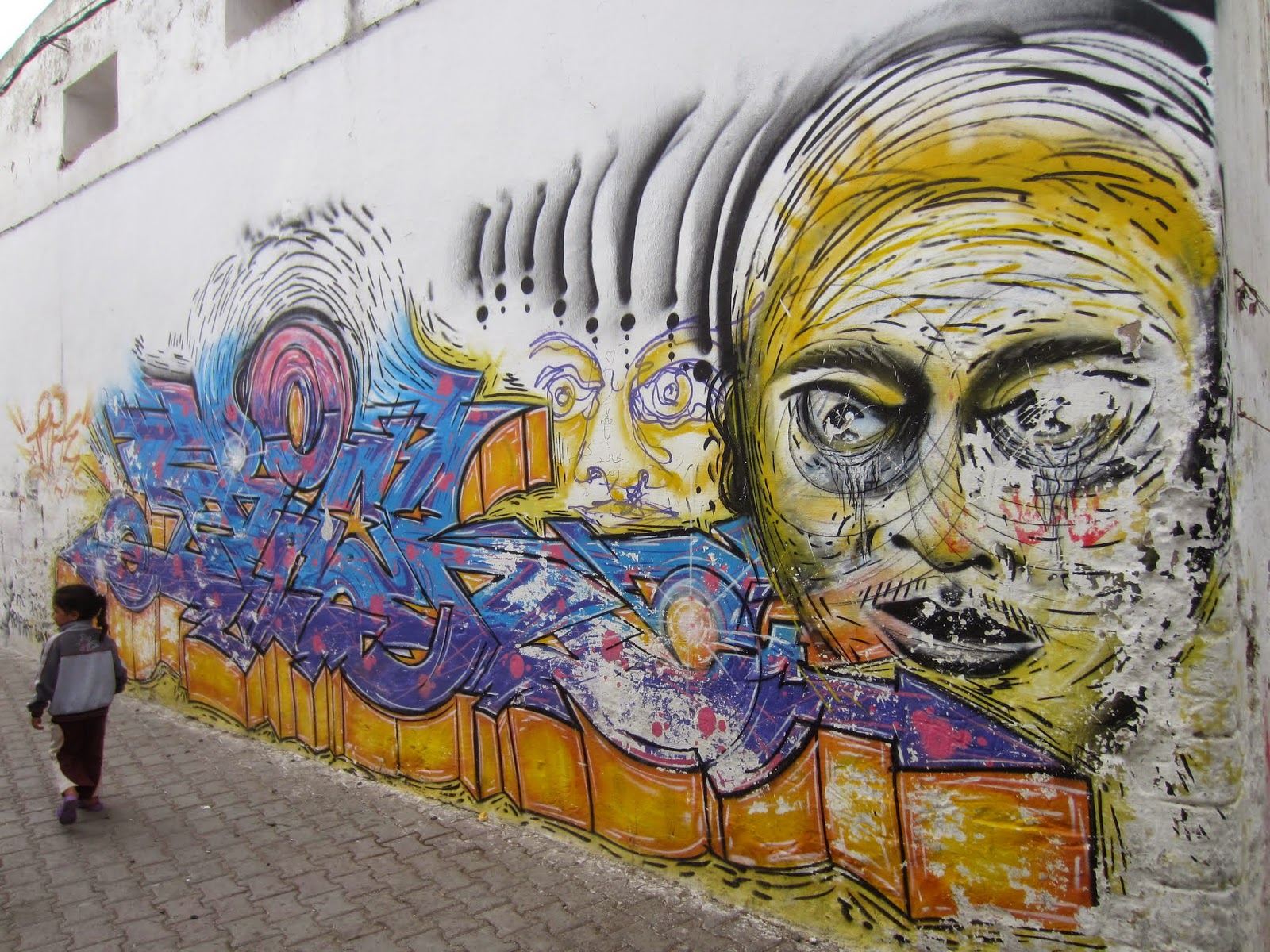 After the tranquillity of Oualidia and Azemmour, Casablanca was a shock. We’d expected it though and had been our plan to visit for a while. The interminable drive continuing on until dark took its toll; tired and hungry, I couldn’t focus and just wanted to stop anywhere rather than finding somewhere safe and practical (close enough to the centre). After stopping in one of the many Casablancan suburbs, Jamie found out about “La Grande Mosquée” (Hassan II Mosque)and its aire/small car park (Click on the link to read our brief review of our stay there, 8th bullet under Morocco). Forget the grump, I had to admit that it was a great find – right in the centre of Casablanca, metres away from one of the biggest and nicest mosque in the world with a 24hr guardian – it was the perfect and safest location in the city at the very small cost of 30dirhams!

Parked, paid and settled, we went on a walk around the mosque and the souqs as the evening was drawing in. It’d been busy, we could still sense the buzz of it. Few stalls were packing up. It was lovely to walk back arms in arms through the narrow streets and big avenues of a city we didn’t know, but had heard and read a lot about, Casablanca. 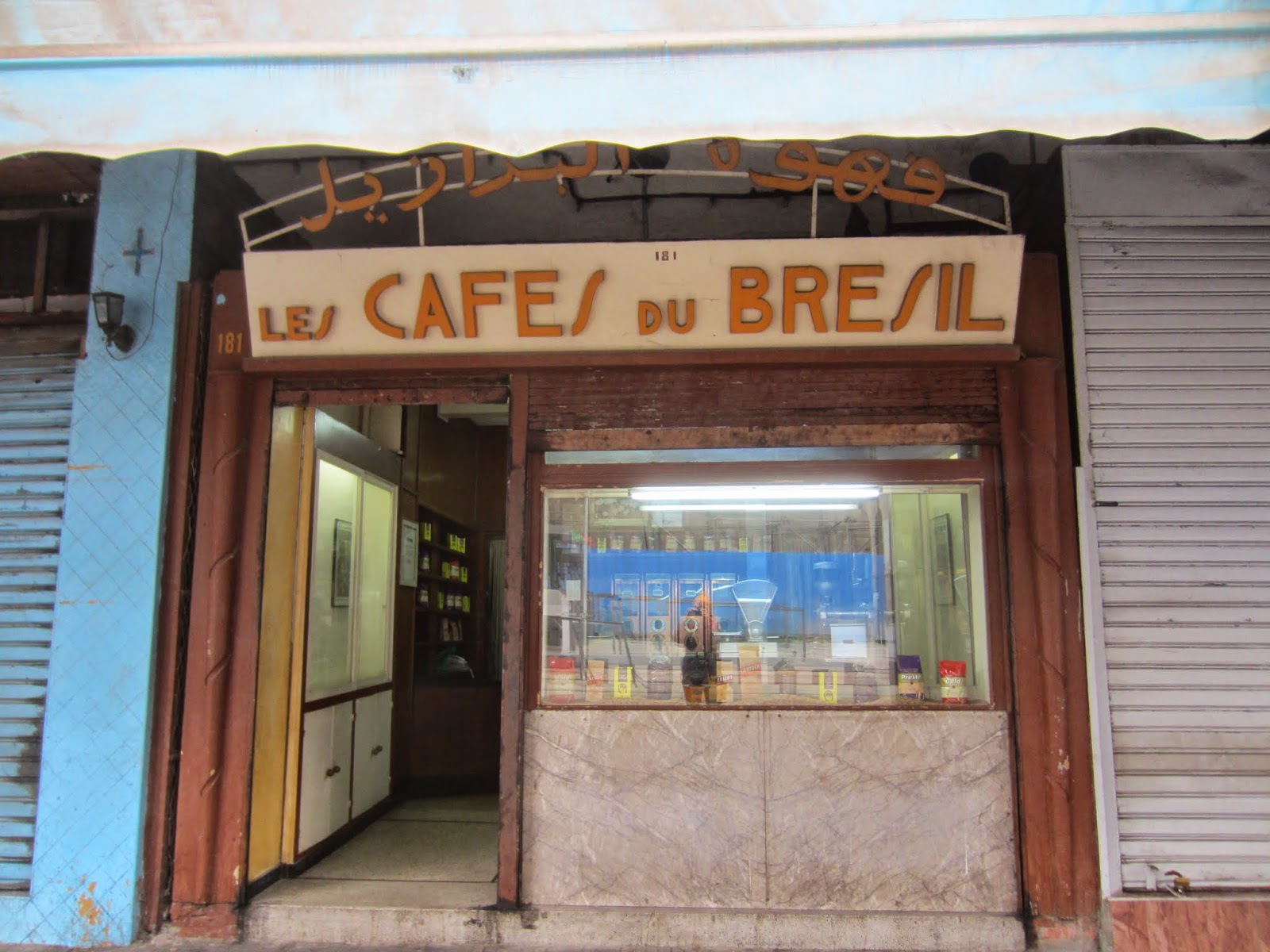 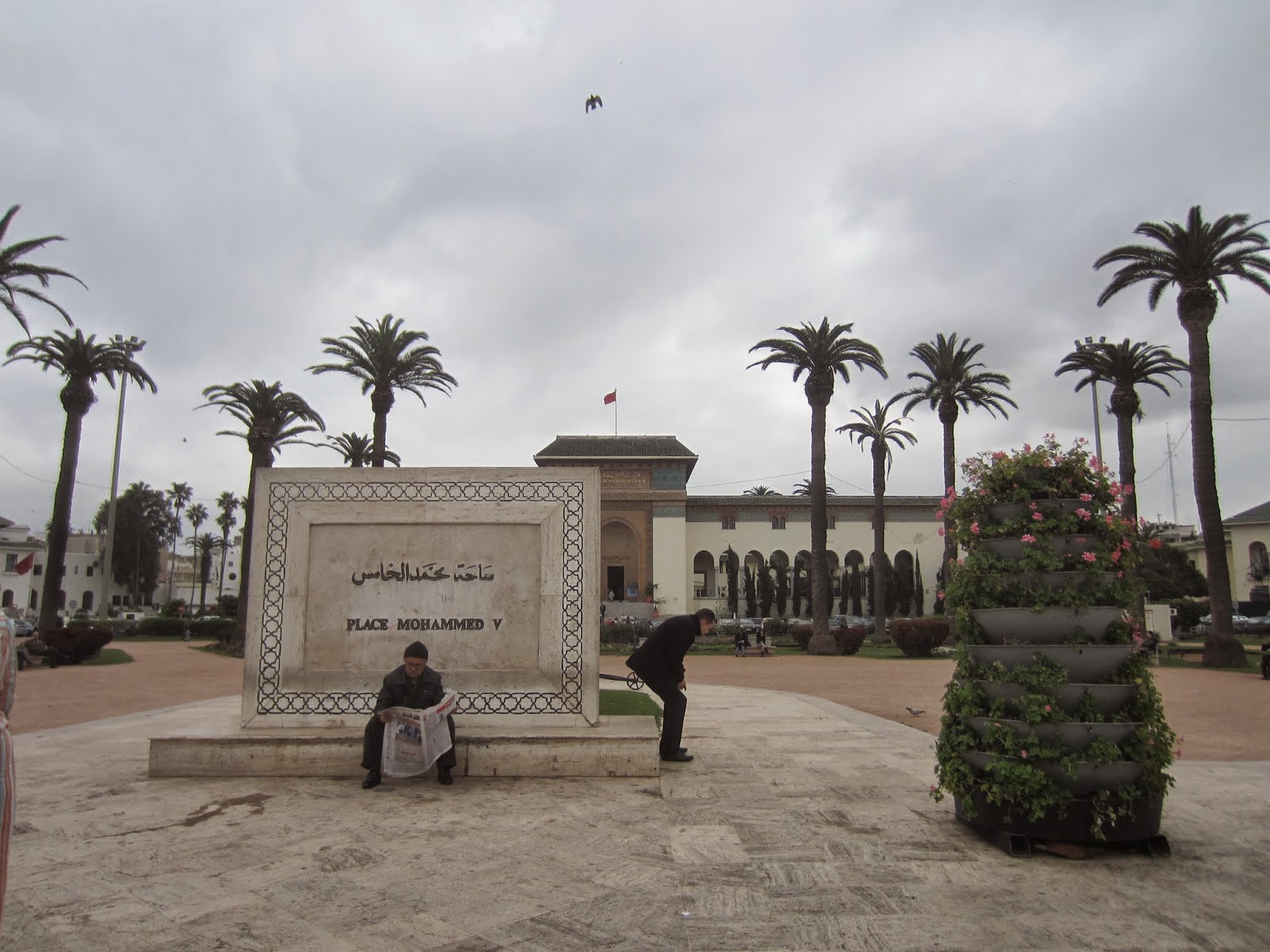 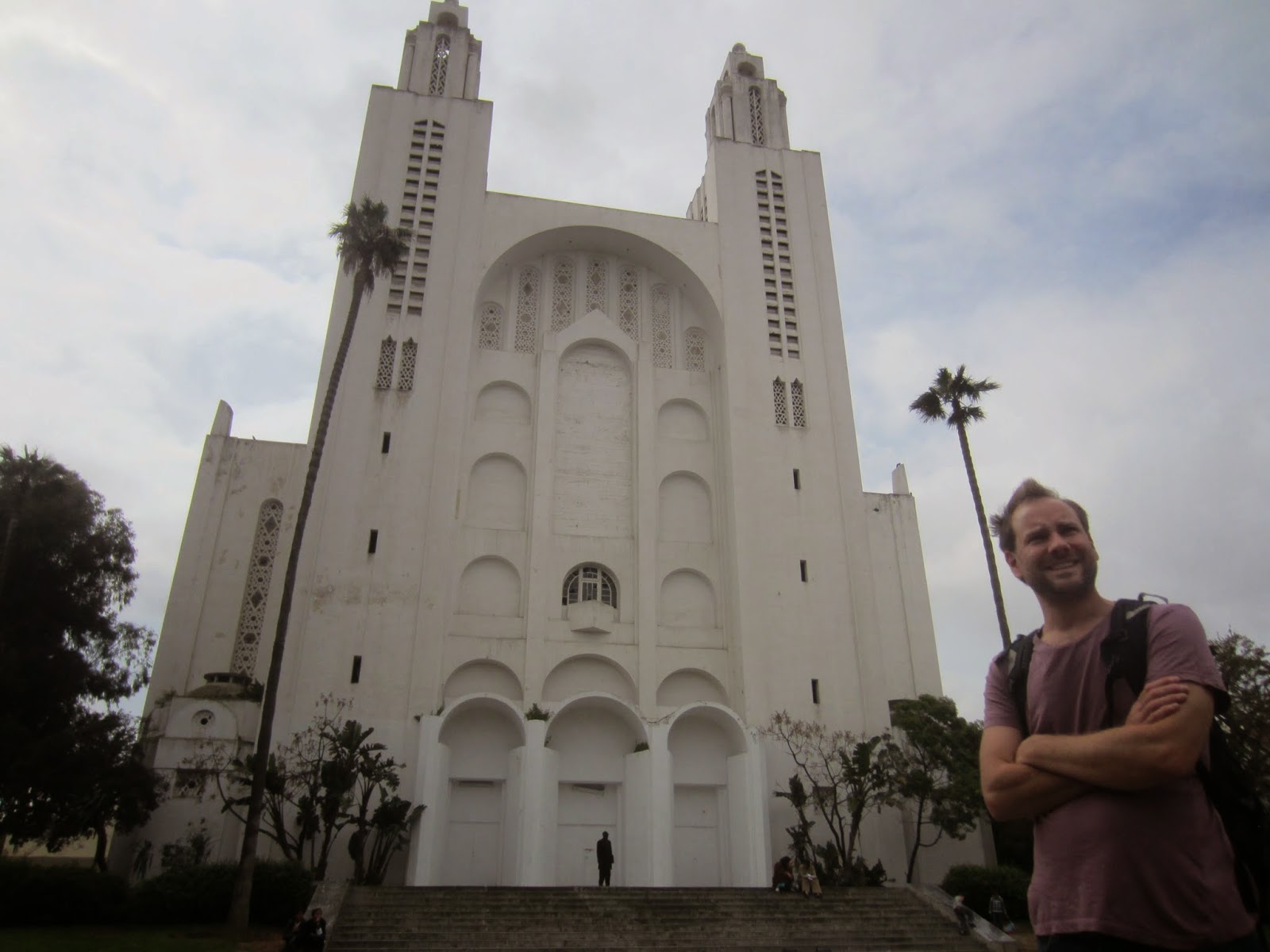 The last town we stopped at was Assilah. Probably the best place in Morocco to ease us back to Europe. We had loved our time to discover such a beautiful culture and people, but we were yearning for little things such as chocolate and biscuits; sad isn’t it! But also bigger things, a clean city/town/village where recycling’s available – that’s where Assilah came into the picture. It was as clean as or even cleaner than some places in Spain/France/ or England. 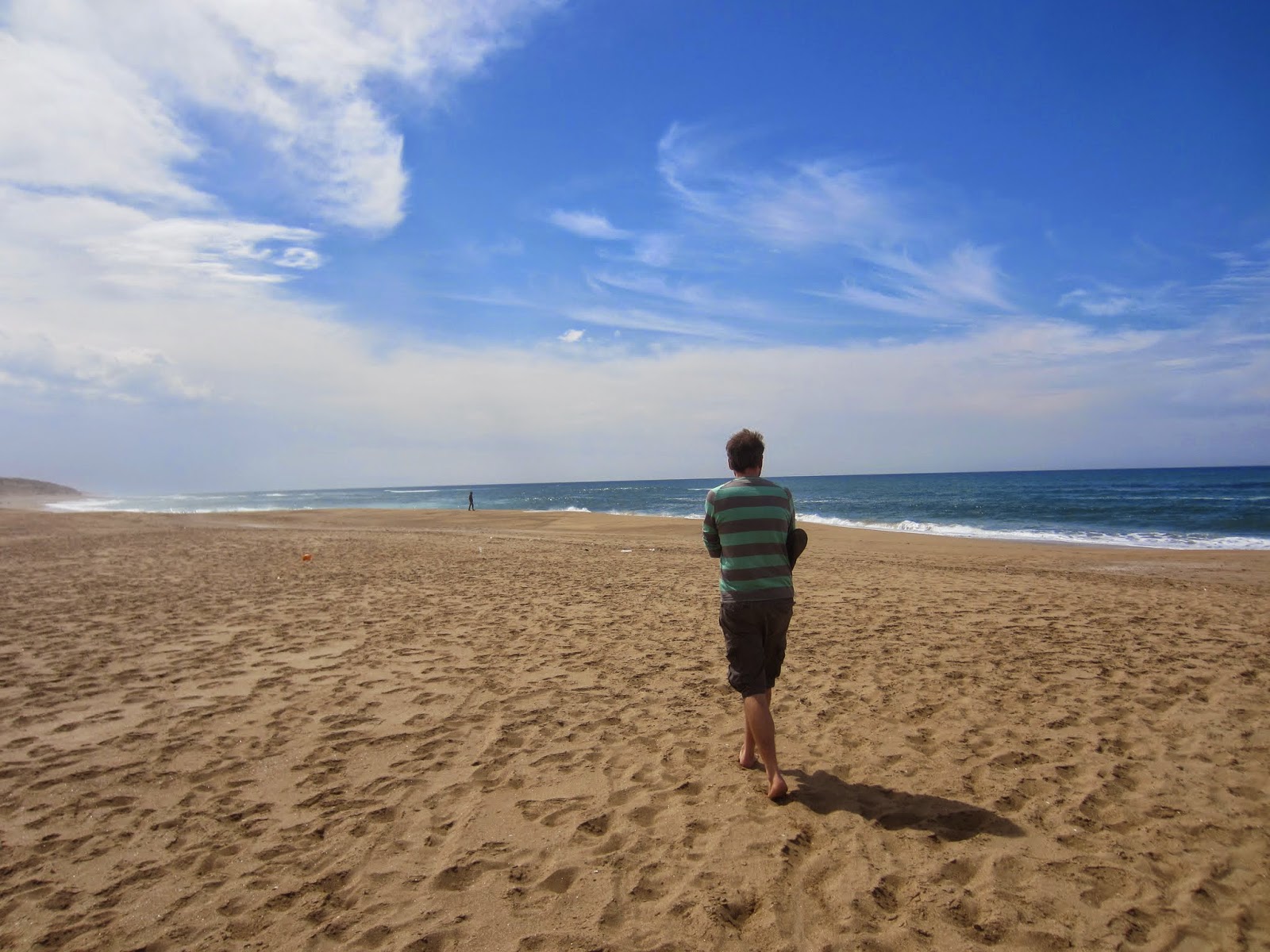 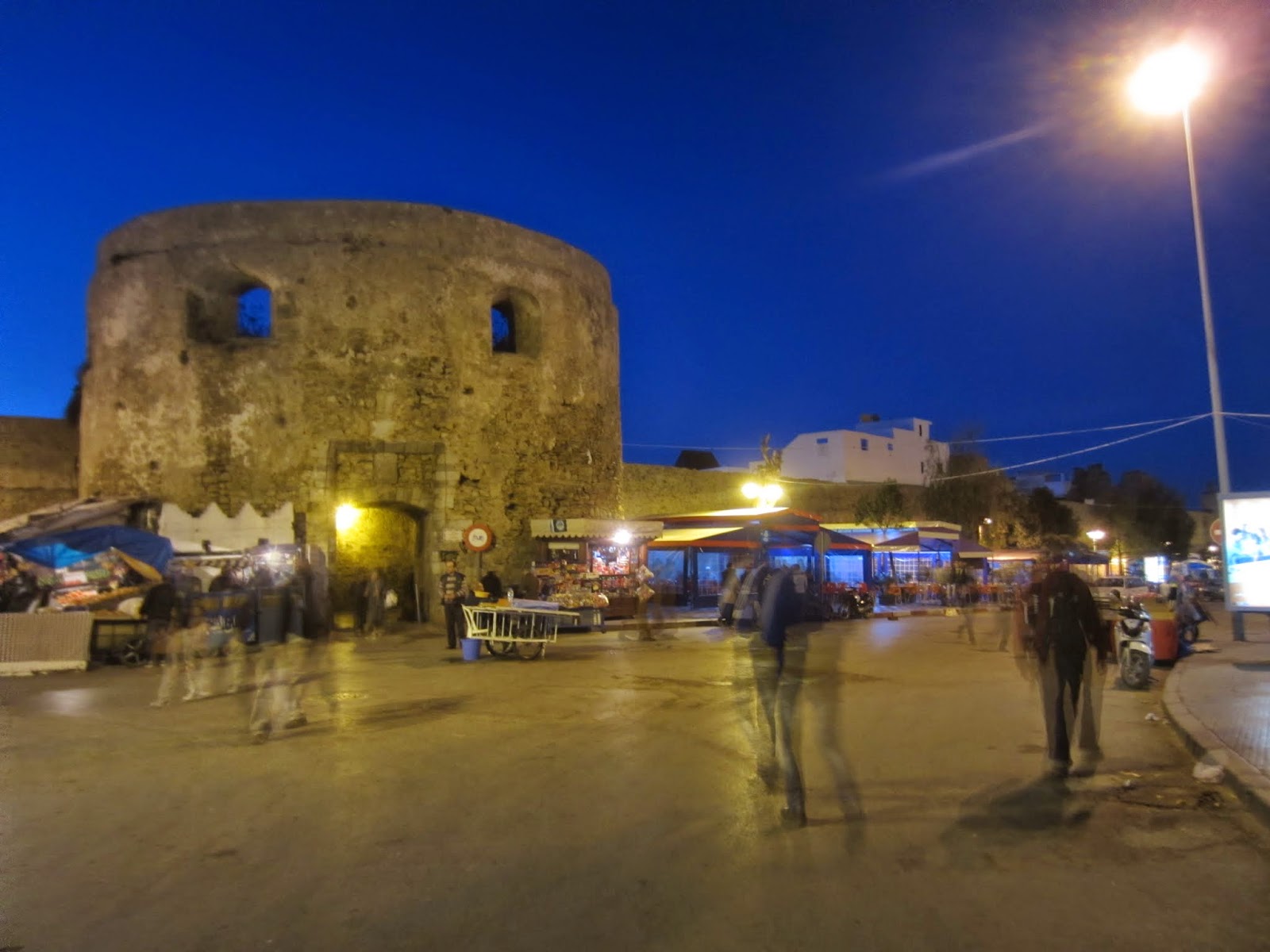 Yes, Morocco has its problems such as poverty, urban planning, environment and territorial divisions to name a few, but it is a safe and welcoming country for all. Whether travelling on your own or with your family, your experiences will be different, but you will be met with the same smiles and honesty across North and South, East and West. Jamie and I loved it and hope you will too. Take the plunge... Do it!
http://www.whyarentyouturningleft.co.uk/p/why.html
"Camping Esprit Nature" "Camping Morocco" "Europe in motorhome" "La Fromagerie Essaouira" "Oualidia lagoon "Sidi Ifni" Assilah Azemmour Casablanca Essaouira Medhiya Morocco Tarfaya
Location: Asilah, Morocco