Posted by Unknown on March 11, 2014
After our couple of weeks at Jamie’s sister’s house, Sallie in the "Parque Natural Los Alcornocales" (The Acorns Natural Park), preparing the van for the second chapter of our travelling adventure, we had itchy feet. We needed to move on and explore new territories. Sallie and Dan’s house had been busy too; with a German Wwoofers family (aka WorldWide Opportunities on Organic Farms or Willing Workers on Organic Farms) helping them with their garden/land, a German family friends of 5 (Carl, Sara and their three children) and another family friends of friends (Stefan, Meike and their little son, Beno), all of them with motorhomes, the top of their drive looked more like a small wild aire / campsite than their normal driveway. It was time to go and enjoy some time on our own.

We left on Friday 31 January. We knew it wasn’t proper goodbyes to Sal’ & Dan, Noa and Eliah as we knew we’d stay with them again on our way back from Morocco before heading to Portugal. We also vaguely planned to meet up with Stefan & Meike who headed there a few days before us. We’d booked the cheapest one-way ferry we could find with Balearia from Algeciras to Tangiers Med for 142Euros (more expensive than we’d thought), but booking it on other days or weeks in advance wouldn’t have made any difference. We ate our greasy, but affordable dinner on board, nearly forgetting to show our passport and fill in the country entry form! Wheels on Moroccan land, going through customs was quicker than imagined, uneventful and friendly as the officer dealing with us smiled at us when leaving and asked me jokingly if Jamie treated me well as it’d be happy to look after me... So cheeky!

A few driving hours later through the night, off roading near Chefchaouen, and I found myself emptying my guts out through the top cabin window of our bed. The greasy dinner was definitely not going in. My stomach was probably trying to accommodate itself to different drinking waters too. Jamie got a little worried with this rather not so nice start, but it better happen now rather than later.

Morocco has many campsites; private and municipal ones. Our first experience; Chefchaouen camping municipal Azilane. A nice earthy-local hilltop campsite overlooking the old and new towns. It had all the facilities, but we discovered on our second day that the hot showers weren’t working – it wasn’t too bad for us as we could use the shower in Izzy, the campervan. We ended up staying three nights as we wanted to discover the beautiful mountain town of Chefchaouen and its old medina.

Back in 2006, Jamie and I had crossed the Mediterranean with Sal’ and Dan. We’d decided to explore Tetouan’s old medina in a day on a limp. Followed by a young man our age wanting to be our guide most of the day and hassled by rugs/leather shoe & bags/furniture sellers trying to lead us into their shops had left us a mixed feeling. I’d “shuved” this experience in the back of my mind – it was a long time ago, another time, another period – I didn’t want to tarnish the beginnings of the second part of our trip.

Chefchaouen’s heart in the medina was the complete opposite. Hassle-free, we could mingle around the narrow alleyways and backstreets without being lost as the sun was going down. The medina’s small enough to be able to find your way back or at least to its main square by the Kasbah. Traditional mint teas by the top terrace of one of the many restaurants & cafes by the main square, Place Uta el-Hammam and overlooking the Kasbah, we felt far away. 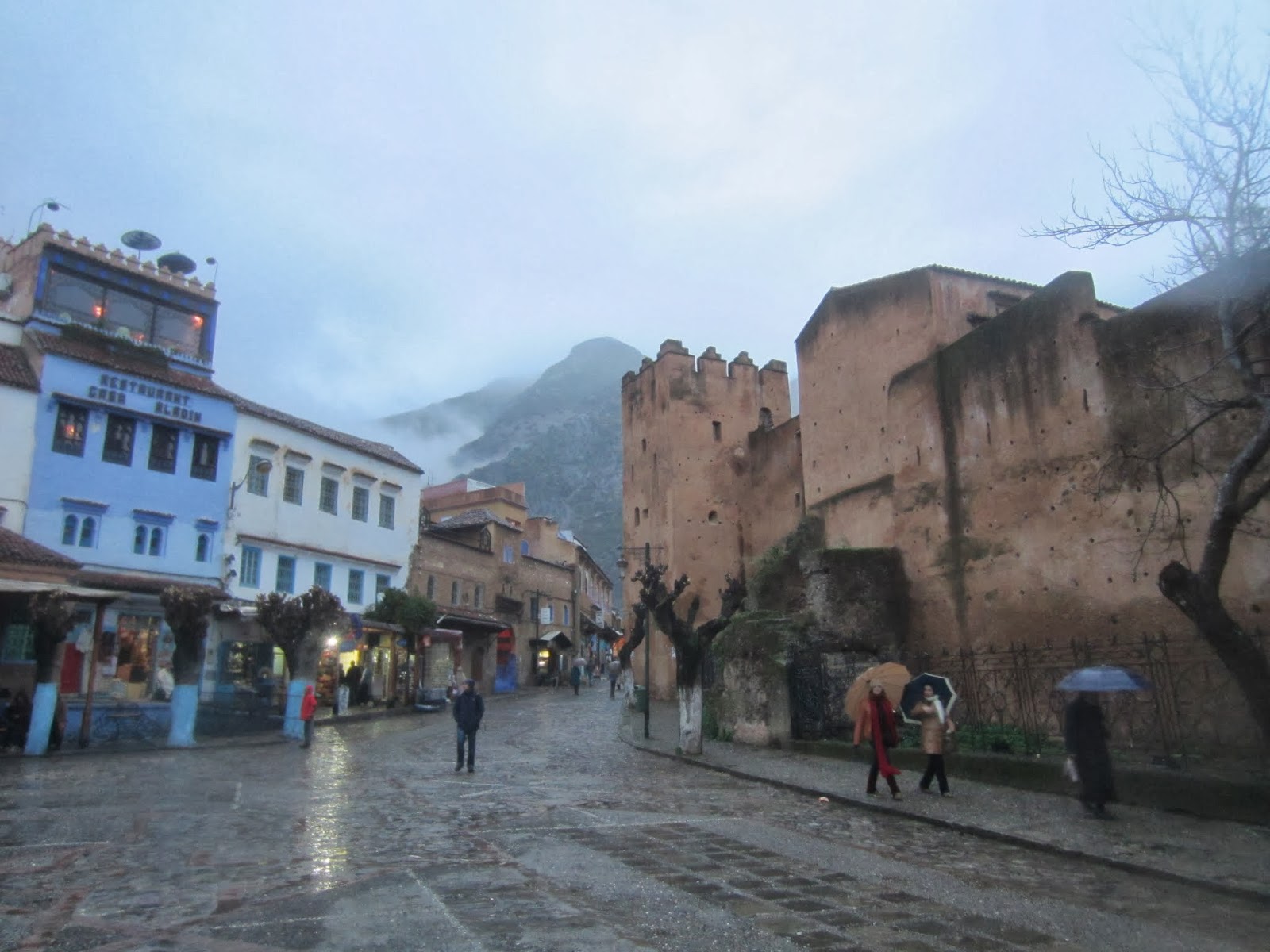 The exotic, but slightly cheesy-named “La Lampe Magique” was our treat. Aladdin and his genies didn’t come out to fulfill our wishes; we were feeling pretty lucky already. Our first meal out in Morocco felt that little bit special. An impressive mooresque three storeys-building hidden in a narrow backstreet off the main square, we sat on the cosy top covered terrace heated by the nice chimney fire. Trying the few words of Arabic I knew and my French, it was fine. The menu was translated in English anyway. We ordered two “menu complet” – starter + main + mint teas & biscuits for 85Dh each! With the mineral water and tip, we paid 200Dh, around £16 for two three-course meals and drinks!


As well as jibberishing a few words of Arabic, I started wearing a headscarf too. My friend, Jill had brought me a lovely yellow-orange golden silk scarf back from Cambodia last year – it became my hijab for the next six weeks. Morocco is one of the most westernised countries in Africa. Whilst most women we saw, young and old were wearing a veil, many don’t either, particularly in cities. As we were slowly going to be heading to the mountains of the Middle & High Atlas, crossing small villages and hamlets where people have kept more traditional values, I preferred covering my hair, but also most of my arms and legs. I felt a difference for it. Respected. People, especially older women and men, sometimes smiled at me when walking past. Combined with the few words of Arabic which people would be impressed about and think I’d speak it! It was nice and it always made Jamie and I smile.

Stefan, Meike and Beno’s van was there! We hadn’t planned to meet in Chefchaouen, so it was a nice surprise to see their red van parked in the campsite when we woke up on the second day. After explaining the headscarf, we caught up with each other. Mint teas and coffees with milk sat in the biggest café on the medina’s main square – a very male-oriented traditional and local café if it wasn’t for the few tourists like us sitting at the terrace. We watched the world go by with Stefan, Meike and German-Swiss-campsite neighbours, Marcus and Claudia. The latter made us dream talking about driving through Western Sahara, Mauritania, Mali and many other countries in Africa. Marcus had overlanded for many years through Africa, but it seemed that for now, him and Claudia were just going to stay in Morocco and then go home.

I’d hoped to try the traditional public bath, the hammam in Chefchaouen, but it was shut for repairs whilst we stayed – there were no signs or information on the door, a local kindly told us as I looked for the entrance. I’d definitely have to use our shower in the van, not as an exotic experience!

Chefchaouen is sort of the start of the “kif” or "kief" region – The Rif mountains on the East are where most of the world production of cannabis is grown. Being young and foreign, we were always asked by the same old man to buy some “kif” when coming out or entering the campsite! Back in the campsite, I’d go to its little shop corner at the back of its restaurant every morning to buy some fresh bread and, each time, the 15-year old lad behind the counter looked more and more stoned, blatantly smoking and trying to wave off the smell! It made me laugh every morning. 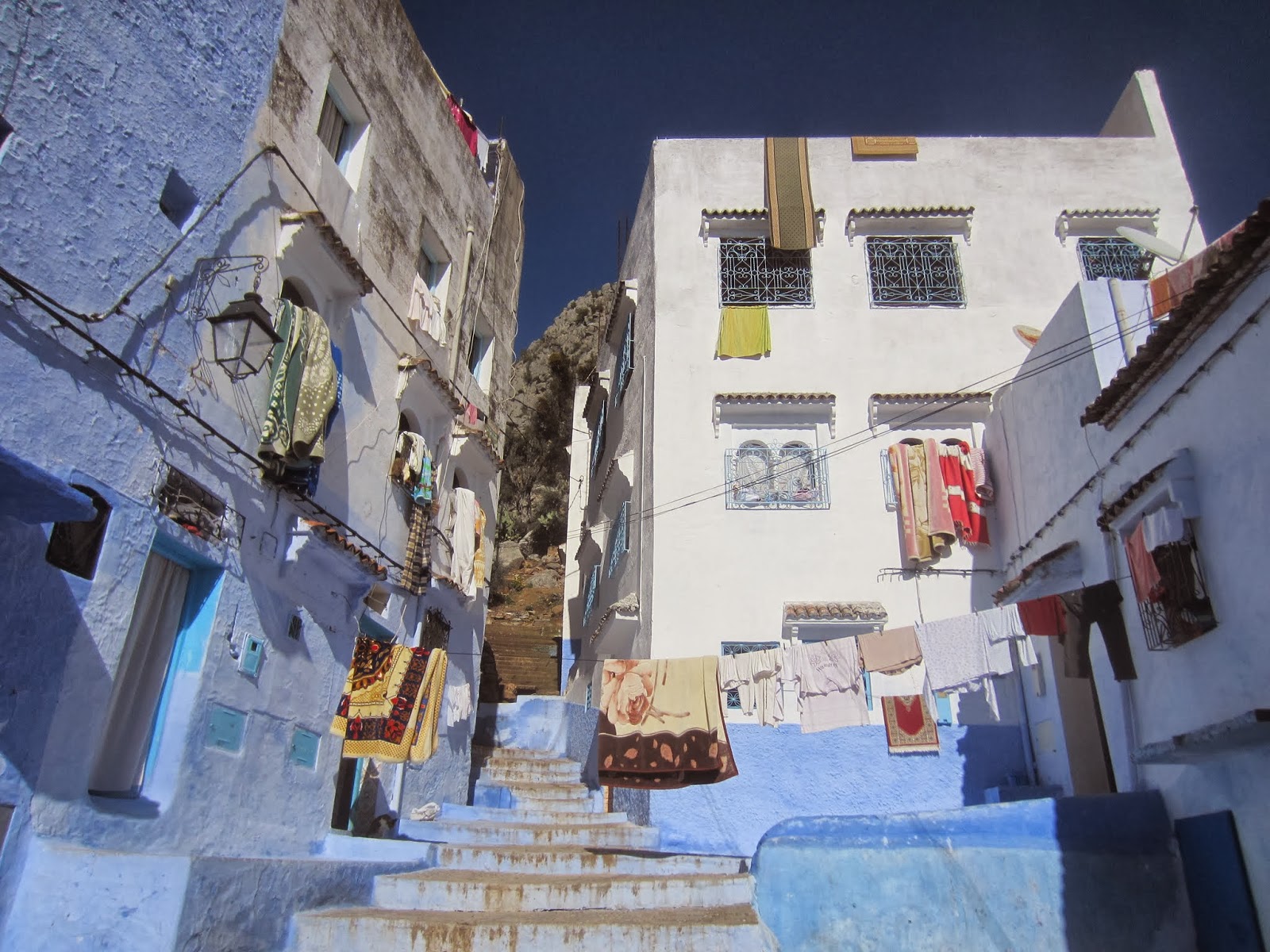 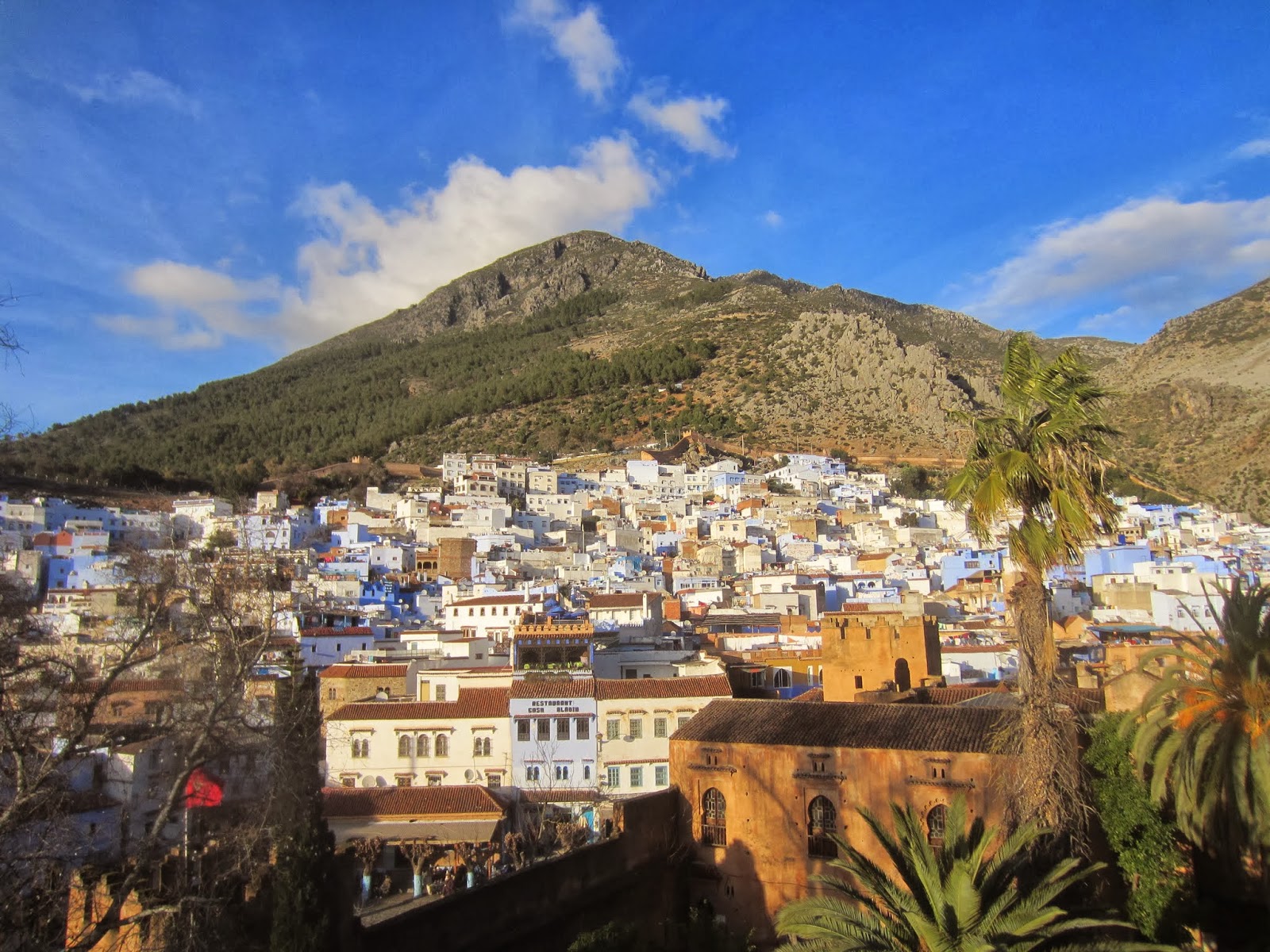 The campsite was next to the Hotel Atlas Chaouen, one of the only three places where you could buy and drink alcohol in the city. We visited it on our first night. It was like stepping back into the early 80s; behind the double doors of a small back room of the hotel was a bar with mostly men if it wasn’t for the few couples there. Bathed in smokes of cigarettes and fat cigars, men were lusting over the three belly dancers bouncing their hips to the sound of the folk Moroccan band playing. Was the Tony Soprano of Chefchaouen making a deal with the Carmine of Mèknes in one of the corners? Sat outside the room, we decided to head back after a couple of drinks – it was just a little bit too much for us.