Posted by Unknown on November 13, 2013
Diving leisurely exploring some of the fauna & flora & sea life of Norway’s underworld and completing my dry suit training at the same time was amazing! Lofoten Diving is a family-run business, Adriana had been the one emailing me and Daniel, her husband was the one who gave me the training and so who I dived with. The greatest thing is that they really wanted to help me – I’d explained that I’d already contacted three other diving centres in the country without success. My old diving centre back in London hadn’t even bothered replying back to me either. They took me diving just on my own! 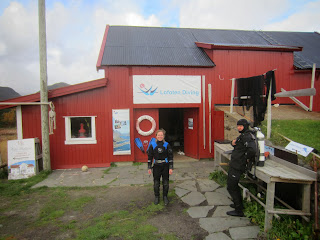 Diving on my own with Daniel was a privilege. It helped me feel much more confident. It meant Daniel could concentrate on what I was doing and advised me on what to do if suddenly I could sense my body going back to the surface. By the end of the dive I really felt as one with the water and that I was making full use of my breathing to get my buoyancy right. 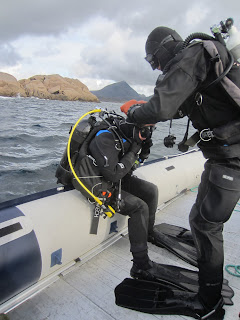 It felt nice to get to know Daniel and to even chat with his cousin, Gabriel who drove our inflatable boat to the diving point. They’re both from Slovakia. What an amazing life story he’s had so far! I got to know how from learning diving in the Slovakian lakes, Daniel ached for more... When one of his cousins told him about needing a Russian & English speaking-scuba instructor in the Maldives, Daniel jumped to the opportunity. From there, he trained divers in the far reaches of the world for nine years. It’s finally in Bali that he thought of settling down, after Daniel met Adriana. After a couple of years, they set up their own diving centre on the Lofoten and the rest is history. 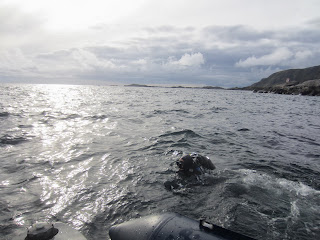 Whilst I’d been discovering some of the Lofoten’s waters, one hour away, back in Reine, Jamie met Sandro, the Saddle Skedaddle guide on the islands. Jamie’s brother-in-law, Dan runs cycling tours of all different levels (from easy road tours to mountain biking ones) in Spain for SaddleSkeddadle. When Jamie skyped Dan one evening, he told us about Sandro and thought we ought to contact him.

Sandro was not only Dan’s Norwegian alter ego, but also had the same sort of looks, mannerisms and way of life – spooky, but nice in a weird way! Half Italian, but born and bred in Norway, Sandro’s not your “typical” Norwegian. Dark long hair, olive skin, medium height – he was the complete opposite of the tall, blue eyed and blond hair stereotypical Viking. Like a lot of Norwegians and Finns we met along the course of our travels, he lives & “breathes” the outdoors. Professionally and privately, he is very active and always close to nature: he runs “Reine Adventure” in Reine. As Saddle Skedaddle’s tours happen in the Summer, most of the year , he runs kayaking  trips on the island. He also enjoys skateboarding, snowboarding and surfing.

Close to the local community, he advised Jamie to try the local family-run restaurant right on our doorstep (it was literally a few steps away from our rorbuer), Hamnøy Mat og Vinbu. Once Jamie picked me up from diving, we discussed whether we should go there or not – we were already treating ourselves to amazing accommodation, could we really afford to go?... “What the hec’! We only live once!”

One of its specialities such as in many parts of northern Norway was whale-based dishes... Was that really ethical? Surely little Hamnøy was no Japanese port with huge warehouses and distribution centres employing migrant workers risking their lives in unsafe waters between Russia and Japan. So we did go for a whale carpaccio starter and Jamie even had a whale steak whilst I went for the local fish of the day. Our dishes were so yummy! It tasted so fresh and different from what we’d ever had before. For “whale-virgins” like us, whale looks and taste like beef.  Not only the food tasted amazing, but the traditional wooden interior gave the restaurant/bar a warm, cosy and peaceful feel to it. 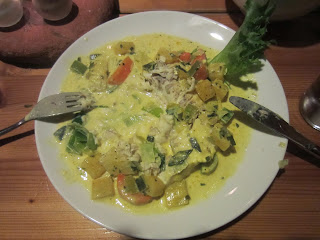 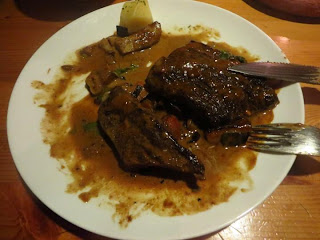 Sandro had agreed to meet us there and joined us as we were finishing our mains. From there, we just talked and talked; getting to know each other, hearing about kayaking trips accidentally brushing paddles with orcas/killer whales, skateboarding down unfinished road tunnels at 2am and snowboarding off piste. We also met his neighbour and one of his friends who’d just bought a house in the village. 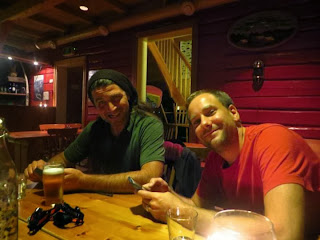 And then, we went on through the night and were joined by all the road tunnel workers and engineers. We noticed a lot of road works happening across the four islands. One of the main works is the creation of a tunnel right by Sandro’s house on the edge of Hamnøy. The restaurant went all of a sudden from being this quiet and peaceful place to being a noisy and busy bustling bar. Most of the workers know Sandro by now as the work has been going on for months so a group of them joined us and we carried on chatting until the wee hours of the morning. 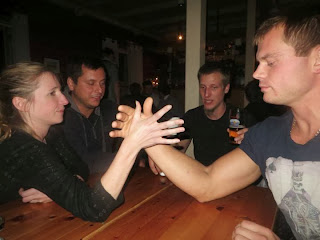 Sandro had cleverly left earlier than us as he was running a kayaking trip during the day. He’d offered us to park Izzy at his and to enjoy a meal with him before we’d leave the Lofoten’s. We were so useless on Sunday! Hungover, we fully were from head to toe! But it’d been a great night. We took up Sandro on his offer as it’d been so nice to get to know him that we thought we’d spend a bit more time – quieter time with him.

We cooked the best hangover diner cure – a full tray of fresh roasted vegetables with local meat balls and burgers topped with cheese! What a FEAST! We chatted with Sandro until late and so made the best of the last hours we’d get to spend in his company. 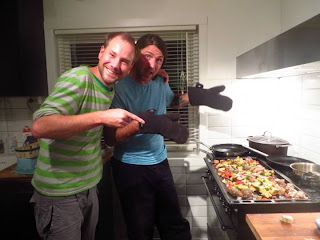 That was the Lofoten as we left the islands after that via a detour to Gimsøy  It had been amazing and will definitely stay as one of the highlights of our trip. 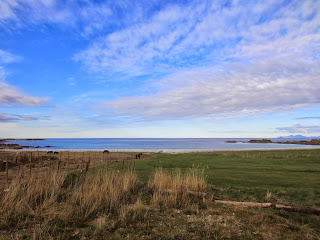