Posted by Unknown on September 05, 2013
Following Flam, we weren’t quite sure where to go. We’d talked about doing a glacier walk and two of the most beautiful national parks in Norway; Jostedalsbreen and Jotunheimen were ahead of us – we just had to choose which one. We read and re-read sections about them in our guide book and online; in the end we went for Jamie’s and headed to Jotunheimen National Park driving through the world’s longest road tunnel, Laerdalstunnelen (24.5km long) and on one of the most spectacular roads, the Sognefjellet road or Rv55.

Choosing which glacier hike to do came a bit as a chance. Climbing up Rv55 past Turtagro hotel, we came to a glacier view point from which we could see that a trail seemed to go to it from the hotel. We drove back down to Turtagro and decided to set camp in the car park opposite the hotel – it wasn’t the most beautiful spot en route that’s for sure, but it was the most practical one – it meant that we didn’t have to move the van to start the hike which allowed us more time to get ready and pack our lunch in the morning.

The walk up Skagadalen was a feast to the eye! Seeing the colours and vegetations transform from lush and grassy autumnal bushes to rocks and ice was striking. 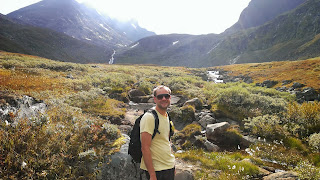 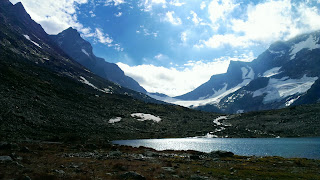 As the trail disappeared and walking on the many rocks that had fallen off the mountain side became harder and harder, I got scared. What if we slipped or the rocks moved? We’d probably hit many rocks and fall straight down the glacier lake where our already dead bodies would freeze and be recovered thousands or millions of years later (depending on climate change) once the glacier would completely melt. Yes, I was definitely being over dramatic! Fortunately, Jamie was there to encourage me and we managed to pull it together. 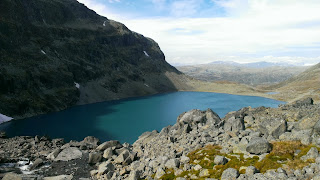 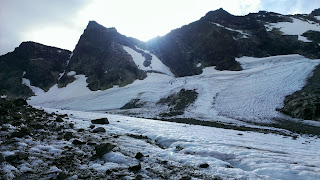 Walking passed the beautiful turquoise-coloured glacier lakes and finally walking on the ice was definitely the “cherry on the cake” or should I say the “icing on the cake”. We both felt enthused and re-energised by the walk – we’d already seen and done spectacular hikes and treks, but this was the Best! 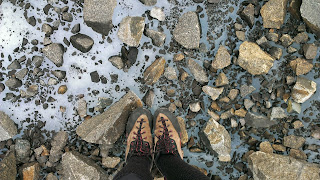