Our Eleventh Week Working In Camping Le Moulin In Chef-Boutonne

Posted by Unknown on June 07, 2016
It has felt like we’ve been leaving in a small bubble for a few weeks now. This is only because, down here, in Camping Le Moulin in the Deux-Sevres’ countryside, France is sleepy, but still working. Strikes and weather haven’t brought us to a standstill. Although the latter delayed us a fair bit, the river Boutonne running alongside the campsite didn’t burst its banks. Some of our very own motorhomers and caravanners made it to us after being evacuated from their own campsite in the Lot and the Marne Valley on the outskirts of Paris. Others didn’t get it as bad, but simply wanted the weather to be dry to get out and about.

Had campers arrived on the campsite at the beginning of the week, they would have definitely turned around and adventured it further South! We saw some heavy rainfall on Monday and Tuesday. The grounds desperately needed cutting, but we couldn’t do anything. By Wednesday, Jamie realised he’d lost the battle with the weather. During those rainy days, we concentrated on cleaning mobile homes and then worked tirelessly around the clock to make the site look good again.

Jamie’s mum and dad, Mary and James weren’t deterred by the weather and stayed with us until yesterday. We felt very spoilt; all of a sudden we had our own personal chefs and shoppers! We had Risotto on Monday accompanied with some scrumchious chocolate éclairs thanks to John (sadly our last meal with John before we waved him goodbye), Thai curry on Tuesday (for my birthday celebration part Three!), scrambled eggs and baked beans on toast on Wednesday, smoked trout on Thursday, we went loose on Friday and joined in the fun of Camping Le Moulin’s Friday Quiz Night. Luckily, Stuart and Sara didn’t require our help and wanted us to have a nice evening with family and friends. Willy and Gill joined us and Michael, one of the campers too. It was a great evening and a lot of drinking! And “In One Ear And Out The Other” (our team name) didn’t do too badly; we came second! 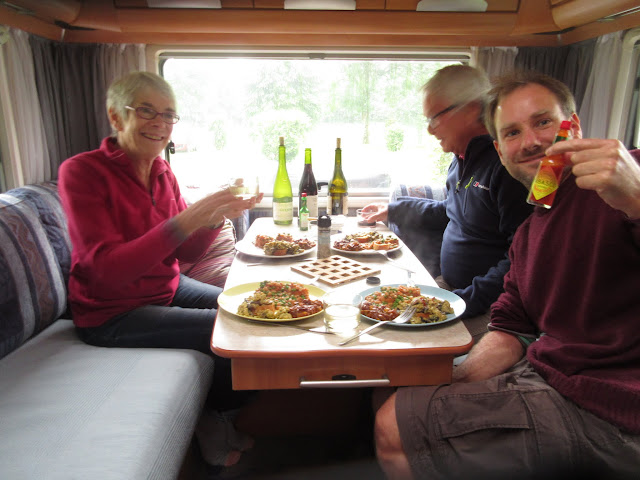 We managed to spend some time with Mary and James on Sunday and went for a nice short bike ride on the outskirts of Chef-Boutonne (12,5km: Camping Le Moulin-Lussais-La Bataille-Chef-Boutonne-Camping Le Moulin). Although we would have liked them to stay even longer, it was time for them to go on and continue their touring holiday which will lead them slowly down to Spain. We were very sad to see them leave!

The site is much busier and campers are starting to book pitches for up to two weeks. The restaurant des Canards is open every day except Mondays; it’s opening its doors this evening, the first Tuesday of the season! The sun’s come out too and it looks like it’s going to be for quite a while.
acsi Camping in France Camping Le Moulin Camping Le Moulin Quiz Night Caravanning in France Chef-Boutonne Eating and drinking in CHef-Boutonne Restaurant des Canards Working in a campsite
Location: Camping Moulin Chef Boutonne, 1 Route de Niort, 79110 Chef-Boutonne, France