Our Sixth Week Working In Camping Le Moulin In Chef-Boutonne

Posted by Unknown on May 03, 2016
We carried on working on the mobile homes pitches this week. Weeding and edging have been our day-to-day. A lot of people have been praising our work and told us we’re doing an excellent work! They say it’s the best the site’s ever looked. How nice is that! This is thanks to Jamie’s amazing edging skills... He doesn’t need Stuart’s digger to clear weeds and make driveways and rows look neater. A big fork, a spade and a bit of sweat and muscles are all the tools he needs! I did try... And failed miserably! My arms are just jelly-like. My “digging” is like a pathetic punch in the ground.

Easter holiday’s finished, the Syrian kids I help out with are back to school. I went on Monday and Tuesday this week as well as Wednesday as some volunteers couldn’t make it. I helped Nour (the eldest of the girls) with her homework everyday; reading texts and writing fables she’s got to learn by heart. The texts she’d been given to read were hard to understand even for French kids. Full of metaphors, familiar sayings and expressions which one would only learn a lot later on. She did really well and, together, understood everything. I read with Dhiaa too. His teacher has now given him a nice story to read at home to practice his reading. Their mum, Maali also needs help with her French. Her course happens three times a week in Niort, 40km away. With five kids to look after, her husband, cooking and looking after the house, it can be overwhelming. I helped her out at the end of the week with one of her assignments. I’ve told her to ring me if she needs to, and hope she will.

Jamie went for his first French lessons. One was an informal setting at the teachers’ home, Émilie. Jamie felt the beginner course was a little too basic for him which was good for his moral. After asking for advice to the volunteers, Jamie went to a more formal course organised by “Mot à Mot” (Word by Word). The association helps anybody including French people, with their literacy and writing. This was a lot harder. Whilst his level was assessed and many forms had be filled in, the volunteer wouldn’t slow down her pace. Jamie couldn’t understand half of what she was saying. Luckily, it hasn’t deterred him. He’s going to stick with it and keep going for the moment.

We’ve been offered some paid work this week. There’s Jerry who, after chatting to us a few times, asked us if we could clear the overgrown weeds and branches invading his back yard. Retired and recently widowed, Jerry still enjoys coming down to Camping Le Moulin. His soulmate for 45 years, Jerry's wife went unexpectedly last year. He is slowly trying to move forward and get used to live without her on his side. Willy’s also asked us to clean a mobile home unit and clear the river of plants – where mosquitoes would lay their eggs; reducing the amount of these nasty bitters in Summer. 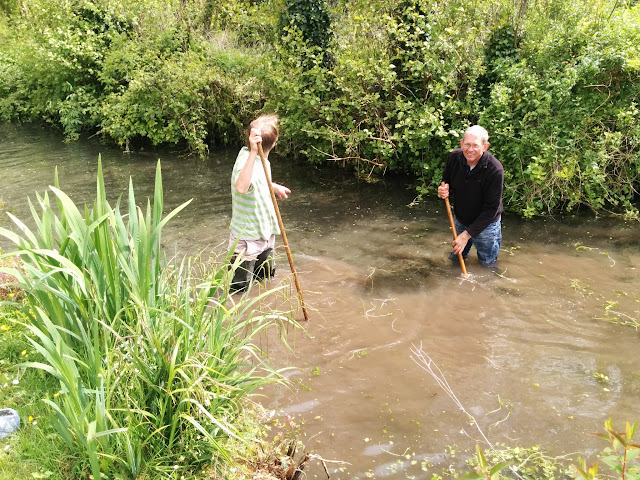 And we looked after one of the campers’ dog this week. Mossy was our companion for a few hours in the morning whilst his owners were looking at some properties to buy in the area. Richard and Penny are friends of Nigel’s (n.b. Camping Le Moulin’s long term season helper). They are staying on the campsite in their motorhome for a couple of weeks whilst they look for a house to settle in and enjoy their retirement.

And this week, windy Sunday meant that I traded cycling for baking bread...