The Beautiful Portuguese Coastline, Lisbon and Historical Tomar in a Motorhome

Posted by Unknown on December 22, 2014
We drove through the Algarve coastline very quickly. The crowds weren’t there yet; end of March, not many souls were out, it was quiet. But it’d been built up too much and probably lost some of its original character. It didn’t feel like what we’d imagined Portugal to be. Actually, reading about the country’s history, we didn’t know much about it all. Somehow, so close to Spain, it gets almost forgotten and engulfed by its neighbour.

Nearer to the Western side, the coastline looked untouched in parts. I had been thinking about scuba diving for a while and researched it when still in Spain. I wasn’t even sure if any diving centres would bother replying as most of them start opening again in April-May. Luckily, Billy from Algarve Dive Experience in Carvoiera did bother and accepted to take me out, weather permitted, the next day (26 March). It had been very sunny and warm, but quite windy in the past couple of days. Billy only had wet suits available to dive which meant that we couldn’t go too deep as the water temperature was still very cool (13°).

Billy drove us around along the coast to try and find the best cove or bay that was shielded from the wind. We chatted about the hardship of running a seasonal business in such dire economic and political times in Portugal, but also about travelling across Europe and North Africa in our motorhome/campervan. Once down the “Smuggler’s Cove” (click on the link to read our short review of this wild camping spot where Jamie and I managed to park our motorhome the night before), we changed into our wet suits and went in from the shore. It was a beautiful and safe dive at around 6metres deep. Billy made sure to point out some of the Algarve submarine fauna and flora. Back up after 43minutes, it had gone really quickly. I would have loved to go back in after a break, but my teeth were chattering - my hands had started getting cold whilst in the water – and my body was tired and aching. Billy and I agreed it was safer that way.

We drove to the nice village of Odeceixe and parked overnight in its big car park. It wasn’t as idyllic as campervanning by the Smuggler’s Cove the night before, but we managed to fill up my empty stomach (i.e. scuba diving) with fresh traditional food at Restaurante Chaparro. Unfortunately, there was a downside to what had overall been a delicious experience. A small plate of olives, pate and butter was brought to us with breads to start with – we’d both assumed it was some “amuse-bouche” on the house. We eventually realised our mistake when the bill showed an extra 5.60Euros on top. A not so negligible amount on a 30Euro-bill. This wasn’t just a “Chaparro” trick, but we slowly discovered, a countrywide way for local restaurants to make a few more euros. If only we’d known!


Driving along the Portuguese West Coast was fantastic. Rough and wild, sheer cliffs and crashing waves. It was a beautiful tableau. A shame we couldn’t choose the campsite to go with it. After three nights off roading, we needed the usual suspects (showers, water and electricity). Sitava Parque De Campismo also known as “Orbitur Sitava Milfontes” it was. By the coast and near the small pretty port of Vila Nova De Milfontes, one would imagine Sitava to be a cosy affair with traditional buildings and a few wooden bungalows. It couldn’t have been more the opposite. The franchise-run campsite’s a giant gated park of static caravans – rows after rows, each one covered with a plastic bash to protect them over the low season.  Fenced off with several electric gates at different point, some only opening at certain times of the day, were we emprisoned?

The ladies at the reception made up a little bit for the non-descript feel of the place. Lovely and speaking English perfectly, they provided us with maps and everything we needed to know about getting to Vila Nova by walk/bike/bus. Although a long way to Vila Nova, 7km, we decided to walk/hike to the small town along the coast. Along the cliff edge meant doubling our distance (14km) to Vila Nova, but unbeatable views.


It was a long, but enjoyable hike. A short walk around the town, its white-washed houses and narrow lanes, we rewarded ourselves with a cheeky big lunch out! Bellies full, meals washed down with coffees and backpacks a kilo or two heavier with provisions from the local Silva Supermercado, we were ready to go back by bus. There was just one little hic. We didn’t exactly know where the local buses went from... Oopsy. What wouldn’t I do without Jamie and his phone! After some time, Jamie managed to find the bus stop marked on Google Maps. School buses were going from the same stop. Many kids and a few workers were waiting too. We asked locals (drivers and locals) to make sure we were at the right place and we’d know which bus to jump on.


After a night on Cabo Espichel (click on the link to read a short review of the camping spot, second bullet under "Portugal"), next up was the capital. Rainy, pretty Lisbon was home for two nights; on Port Belem the first and its big municipal campsite (Parque de Campismo de Lisboa) on the second. We loved walking along the modern port promenade in Belem, the flamboyant 18th century buildings of Baixa (centre) and the steep narrow cobbled streets in Alfama. We couldn’t avoid the famous tourist attraction – the old Tram28 – it looked charming and fun and a nice way to keep dry. We did wish to stay longer and discover more of what seemed a buoyant cultural city, discover its attractive museums and nightlife of Fado, but the rain, dark and gloomy days made us long for change. For some more of the beautiful Portuguese coastline. 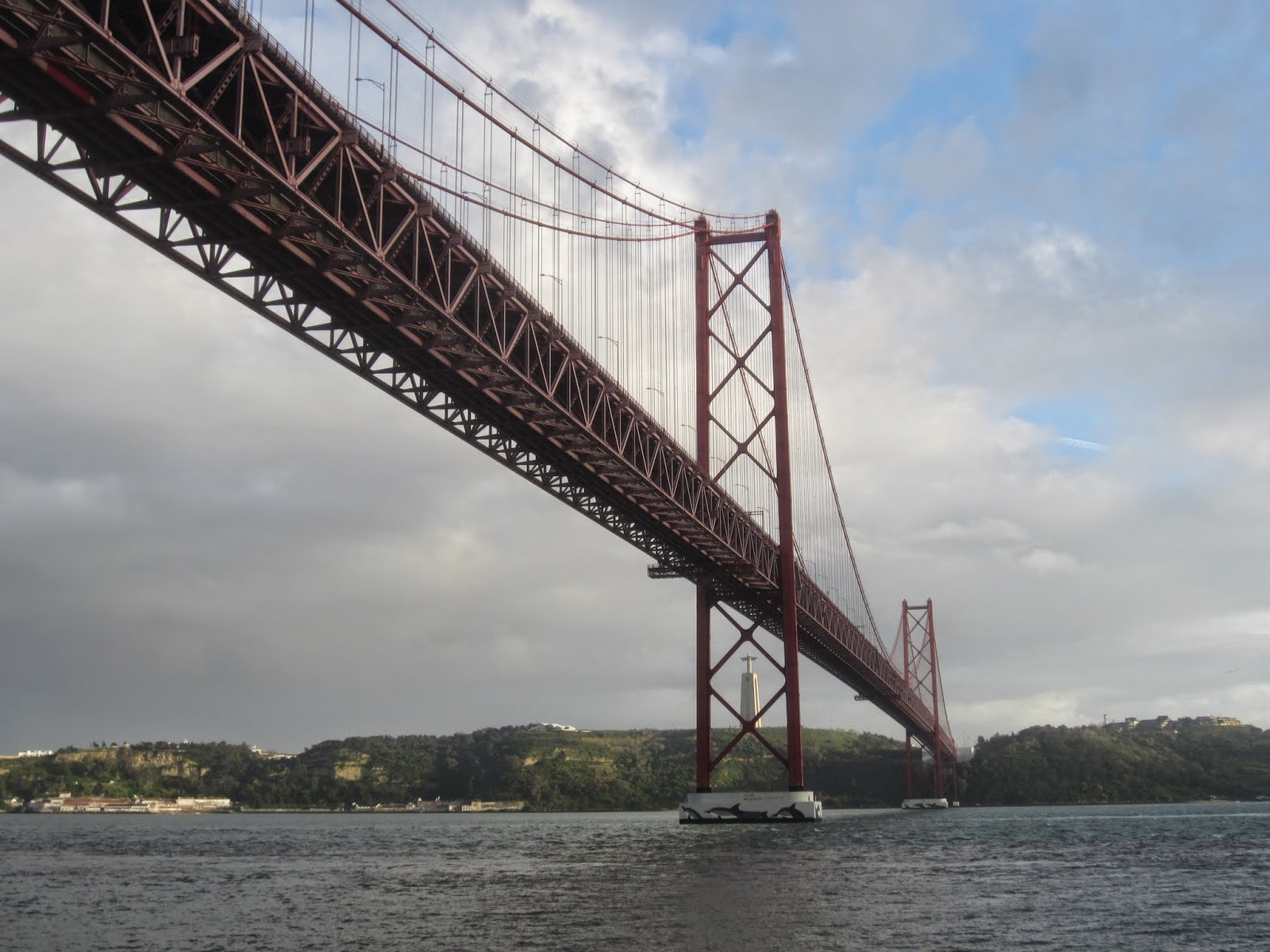 And so we headed the road again to some of Portugal’s most famous surf spots, Peniche and Nazaré. Peniche (click on the link to read the short review of our free camping spot, bullet 4 under "Portugal") may not have been as picturesque and pretty as Nazaré, but it had some wonderful finds, the old covered market hall with many fresh fruit & veg , fish, meat, nuts & spices stalls and counters; the Art Déco interior of little snack bar, Ambassador; the old communal laundry adorned with a huge tiled fresco of early 20th century scenes of women washing and carrying basket full of clothes and sheets. We may not have witnessed the biggest waves as some had done in previous years, but we loved strolling along streets of what seemed like traditional Portuguese seaside towns. 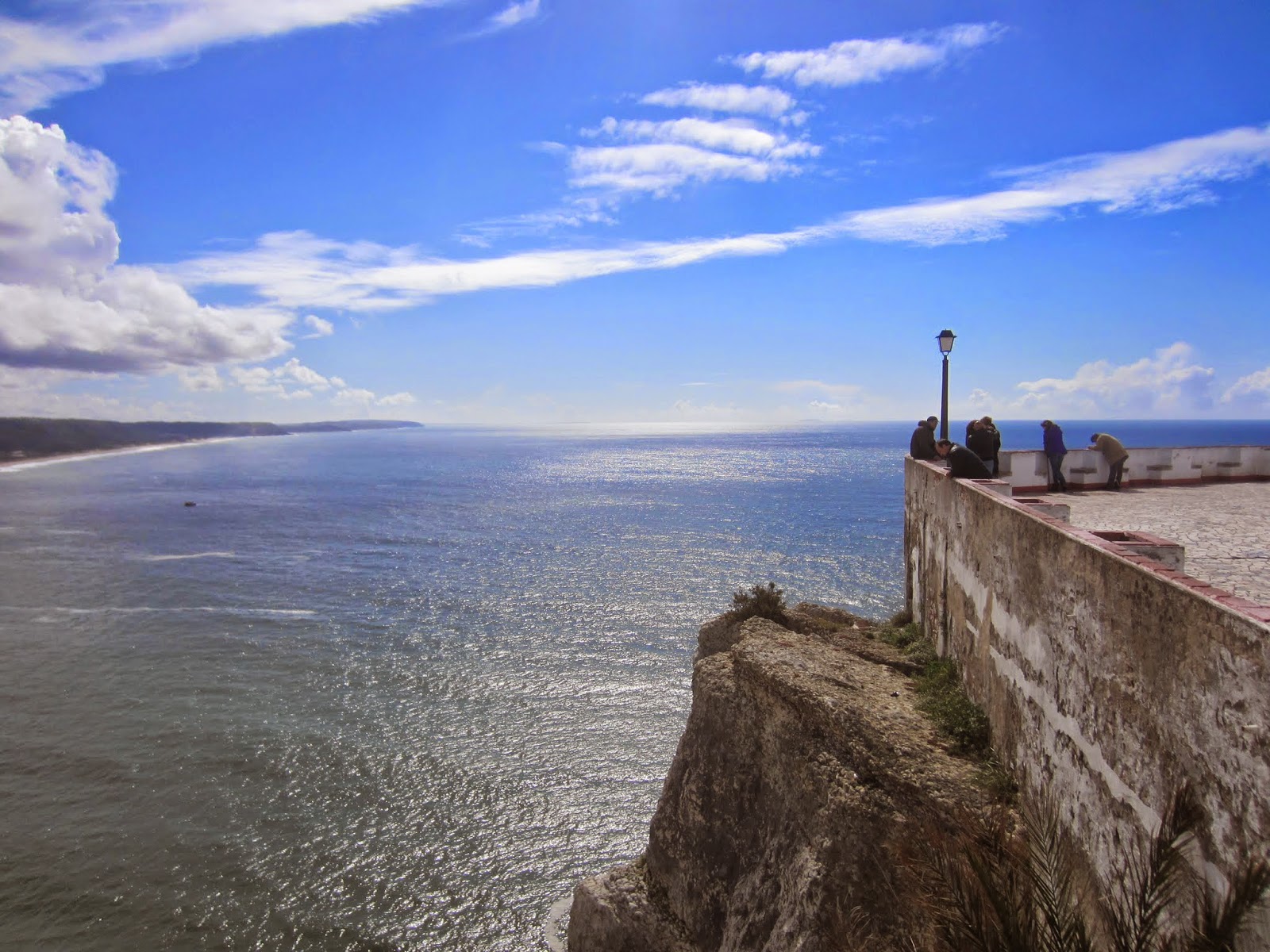 Once passed Nazaré and one last night along the coast, inland it was. We wanted to explore its small quasi-abandoned villages, fortresses and National Parks of Portugal. We’d read about the historical and majestic town of Tomar famous for its UNESCO World Heritage Site; the Convent of Christ (Templar Convento De Cristo) built by the Knights Templar in 1160. The huge Gothic complex building, almost labyrinthine, with balconies looking over small courtyards, dark austere corridors of its dormitory, and the splendid circular 16th century Templar church thought to be in imitation of the Church of the Holy Sepulchre in Jerusalem, was an awesome insight into the world of the Knights Templar and definitely worth a visit for a mere six euros each.

We could have easily stayed longer in Tomar. Even though some of the commerce were shut during the low season, the town had a great down-to-earth atmosphere with quirky gems. An abandoned and ruined weaving factory on the outskirts; a museum of matches (Museu dos Fosforos) and the small Azulejo (traditional tile painting) shop; a grand Art Déco Café Paraiso, a quiet elderly locals retreat during the day cum young and beautiful enclave in the evening. It is thanks to the young officer of the municipal campsite (Parque de Campismo – Tomar) (click on the link to read a review of the campsite) that we discovered most of the places listed above. Very friendly and eager to help, he gave us the addresses of the best places to visit and hang out in town. Tomar was definitely a town to be proud of.