The Lofoten's Part 1 - Free Fish, Making Friends, a Rorbuer and Climbing Up a Mountain!

Posted by Unknown on November 12, 2013
As soon as we put a foot on the Lofoten islands, it felt good. Things kept being better and better. First, we decided to stretch our legs after our three hour-ferry ride from Bodø to Moskenes in the picturesque fishing village of Å (pronounced “Oh”). At 5pm everything was shut and quiet, but it was a nice to walk and take pictures of all the deep-red painted wooden huts or “rorbuer” dotted around the harbour. 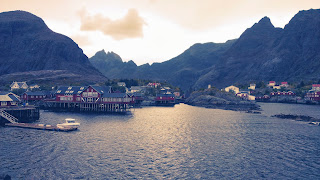 Breaking the silence were only a few fishermen near the pier. As we were heading out of the harbour, one of the fishermen waved at us shouting “Fish!”. It took us a few seconds to react. I stereotypically or judgmentally said to Jamie; “Let’s negotiate if they want to sell us some fish.” How presumptuous of me... as they only meant to actually give us some freshly caught fish! 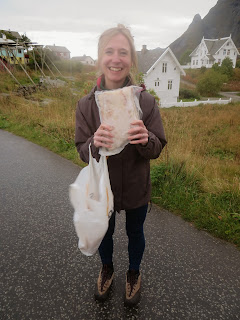 Me, very happy with our find!

Indeed, they were a group of German lads who’d been on a week fishing trip on the islands and were now packing up everything. But, they couldn’t fit all their readily frozen and vacuum-packed pieces of fish in the few polyester containers they had. So we were told to “Take it all!” – Jamie and I looked at each other with a big grin on our faces – we couldn’t believe our luck! We took four big packets; one to eat the same evening and hoped the rest would fit in our small freezer compartment (It did!).  We had a nice chat and they even showed us around their rorbuer – we told them we wanted to hire one too for our wedding anniversary. 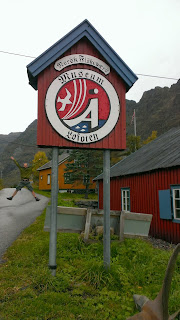 The next good thing was meeting a lovely young German couple who were both travelling for the last leg of their Summer break before returning to University in Munich. Jenny and Andy were staying in the Moskenes campsite like us. We’d decided to camp for the night so we could use the campsite’s dryer following our misadventure in Bodø! 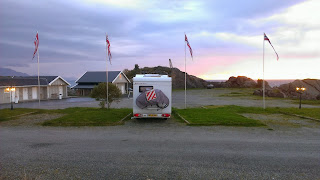 As I went back to pick up our drying laundry, I realised that there were still a lot of time left on the timer (as usual, it was a coin automated dryer), so I asked Jenny and Andy who happened to be sat in the kitchen (the dryer was in a laundry closet by the kitchen) and asked them if they’d like to use the rest of it. They took me on the offer and that’s how we ended up chatting for a good 40mins whilst Jamie was making dinner! 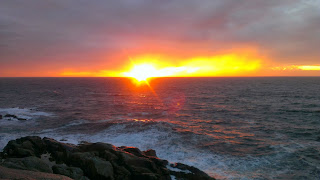 Part of me felt bad I’d left Jamo for so long, but it was so lovely to talk to others, especially like-minded people. We talked about everything and anything; about travelling, Norway, university, Germany, what we were doing etc. We could have chatted all night, but I also knew that if Jamo hadn’t come out, it was certainly because he wasn’t in his usual sociable mood – how would he not have missed an opportunity to speak to somebody who’d studied in Yorkshire otherwise?! Jenny and Andy had been on the same ferry as us and Jamie had spotted straight away Jenny’s sweatshirt; it had the Hull university logo on. After driving and being on the ferry for a while, he just wanted to chill out, eat a nice "motorhome-cooked meal" and watch some cheeky and X-Factor. 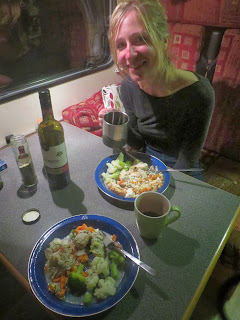 We set off in the morning on our search for a rorbuer. It took us a while to find one. By then, we also knew I’d be going (scuba) diving in Ballstad on Saturday 21 September. We’d originally thought we’d stay in a fisherman’s hut from Tuesday night to Thursday and then wild camp near Ballstad (an hour away from where we were). Well as all plans go sometimes, this one didn’t happen, but for the best.

What happened first, is that we didn’t want to settle for the cheapest, but not so nice rorbuer. For 690Kr (about £75) we wanted something picturesque and cosy. We went to look at some near Ballstad, but it didn’t feel right. Back to the van, it was getting late (4/5pm) , we kept looking on our phone and decided to call the Eliassen rorbuer based in Hamnøy – it meant to go back near where we’d stayed, but it was a lovely area.

I called and left a message on their answer phone asking for a rorbuer for our wedding anniversary, and so if we could get an upgrade or discount. I tried again a few minutes later and managed to speak to Agata. She offered us an upgrade, we just needed to email her with our details and then she’d come back with a few huts for us to choose from! 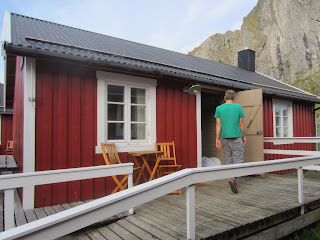 Welcome to our new home!

We were so excited and finally opened the door to our lovely hut or what I would call a harbour cottage! This was going to be our “home” for the next three nights – sorry Izzy (the Motorhome)! We’d just started feeling the cold a lot more by then as well, so it really felt like a treat. Our “pimped-up wooden hut” looked amazing inside out – wood everywhere so it gave this warm and cosy feeling, but with modern touches such as a full kitchen unit including a huge fridge/freezer and a dishwasher! The shower even had under floor heating – I felt just like Skyler in Breaking Bad season 3 when she comments on what a great invention it is walking barefoot in her bathrobe in Ted’s bathroom. 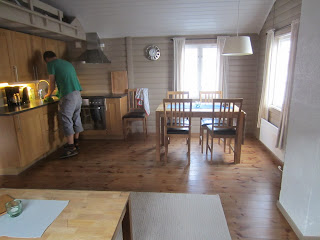 Staying there meant we could give Izzy a break and give it a good clean too, even the fridge. For the next couple of days, we went for an explore around the tiny village & harbour, tried our hands at fishing and rowing... but didn’t even made it out in the tiny harbour because of the strong wind and current – we laughed a lot as it really looked pathetic! And hiked up Reinebriggen to get a view of Reine and Hamnøy – the climb was quite hard and scary at times as we’d decided to go up on a rainy afternoon. Luckily it hadn’t rained too hard, but the ground was wet and slippery; we just had to watch where we were putting our feet. It was worth it though – the view at the top was spectacular! 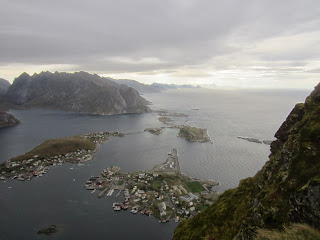 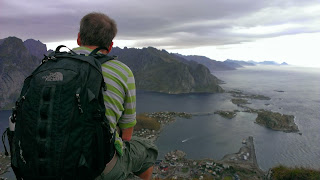 We thoroughly enjoyed sleeping on a double bed and indoors for the first time in a month – it hadn’t been that long really... My usual self wondered if we were being too luxurious and if we’d deserved it too?... Well, I must have quickly forgotten about the latter. In the morning of what should have been our last night, Jamie and I looked at each other with a cheeky grin; we’d both thought about staying longer! Even though diving was an hour away there and back, we agreed to stay another two nights and leave on Sunday.

I must admit that the decision didn’t come that easily. The problem was diving on Saturday – getting to Ballstad an hour there and back seemed too complicated and not fair for Jamie to have to drive me early there in the morning and then back in the evening. He‘d be spending all day driving rather than enjoying having some “me” time. Unfortunately I don’t feel confident enough yet to drive Izzy on my own – I’ve only driven it three times in the past couple of months – I wouldn’t be able to forgive myself if I had an accident in it. Izzy’s not only our vehicle to transport us from point A to B, but our home too.

We finally found a solution – I’d take the Hamnøy to Leknes bus there in the morning at 9.30am – Daniel at Lofoten Diving agreed to pick me up from there. It wasn’t complicated after all! And the best of the Lofoten islands was still to come...” The cherry on the cake”!
"Bodo to Moskenes ferry" "Breaking Bad" "Eliassen Rorbuer" "Lofoten Diving" "Lofoten islands" "Moskenes campsite" A Ballstad Hamnoy motorhome Reine Reinebriggen
Location: Hamnøy, Norway